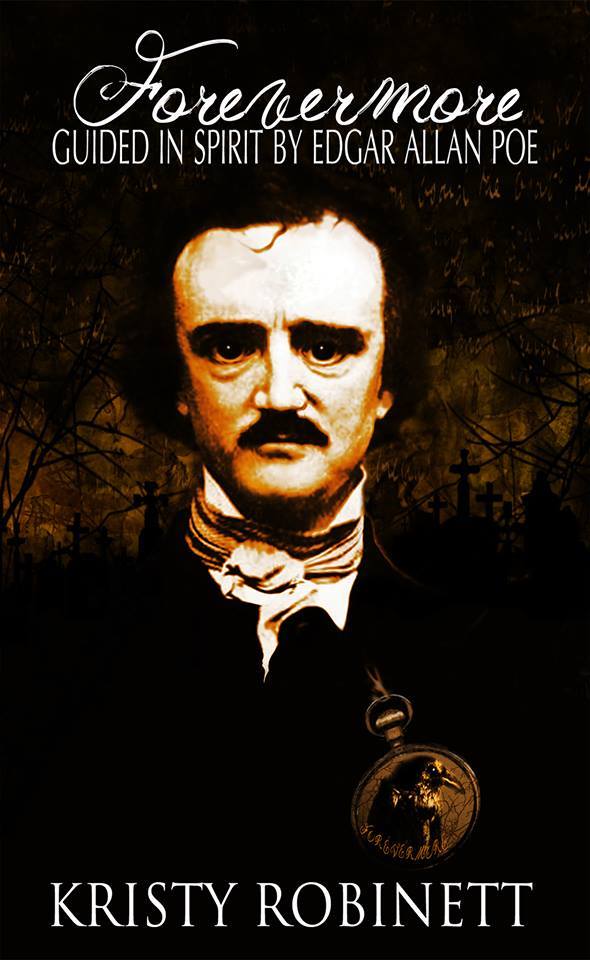 Although often depicted as a madman, Edgar Allan Poe becomes an insightful guide from beyond; a sleuth with a passion for justice in the 21st century. Working with law enforcement, Psychic Detective Kristy Robinett and Poe uncover truths of the past―murders, suicides, and missing persons.

A reluctant teenage psychic and the ghost of Edgar Allan Poe uncovers haunting secrets of Poe's life and his death. Delving into the world of reincarnation, spirit guides, and a troubling murder pact that continues into today.

Edgar Allan Poe was found near-death and hallucinating in Baltimore, Maryland October of 1849. On October 7, 1849 he died and his death has remained a mystery until he visited Kristy Robinett. Kristy was thirteen when she was visited in spirit by literary genius and madman Edgar Allan Poe who introduced himself to her as an unlikely spirit guide. Kristy, reluctant to be called a Psychic or Medium, Edgar Allan Poe helps heal her soul from a difficult childhood, stormy marriage, conflict with faith, and the hard-won lessons that opened her heart to true love and acceptance of her unique gift. The two unlikely team up to uncover Poe's dark secrets of his own life, death, and his afterlife.

Kristy Robinett is a psychic medium and author who, at the age of three, predicted her grandmother’s death. When she was eight, the spirit of her deceased grandfather helped her escape from a would-be kidnapper and it was then that Kristy realized that the Other Side wasn’t so far away and that they could assist her and others. Her life was encased in countless spirit visits at home and school, menacing paranormal activity, and a meeting with her spirit guides who became her constant allies. Born into a strict religious family, Kristy believed she was cursed and hid her psychic abilities for many years. That was until she became a single parent and had to take a second job, working undercover at a Metaphysical Center, that just so happened to be across from the local police department who would drop cold cases on the mediums in the center to both test them, and to see if it would help them. She gained a reputation for being accurate and began assisting a variety of law enforcement agencies as a psychic detective and psychic profiler. Kristy teaches psychic development and paranormal investigating at local colleges, lectures across the country and is a regular on several radio stations around the USA. She has had several television appearances, including Fox News, ABC News and The Ricki Lake Show and was spotlighted on ID Network's Restless Soul, documenting her psychic detective work. Kristy is the author 10 books including It’s a Wonderful After Life, Forevermore: Guided in Spirit by Edgar Allan Poe, Messenger Between Worlds, Higher Intuitions Oracle, Ghosts of Southeast Michigan and Michigan’s Haunted Legends and Lore, and Messenger Between Worlds. She is also a contributor for Patheos, a portal site on educating the public on different religious beliefs. You can visit her online at KristyRobinett.com, facebook.com/kristyrobinett, or Twitter - @kristyrobinett.