The Death of Fairness 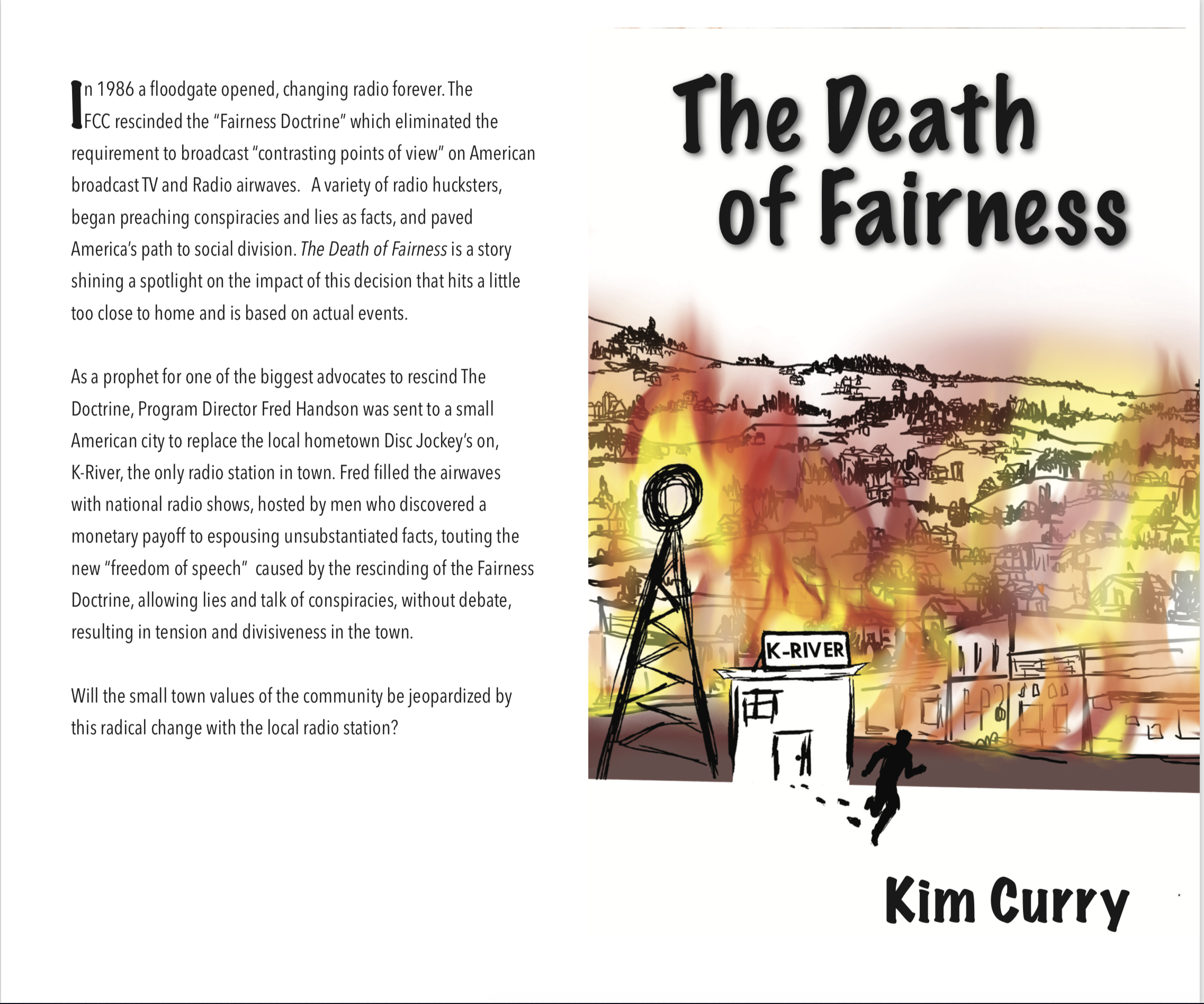 Fred Handson came to River City to prepare the only radio station within 50 miles for syndication and life after freedom from The Fairness Doctrine. The two events collided into a fire and death. It was Reagan's fault.

River City is a vibrant town with agriculture, a Christmas tree farm and the biggest pickle patch in the state. Broadcast changes and the President's desire to protect the first Amendment were on the mind of K-River management. But, they had to keep the changes under wraps..


A simple fire to mitigate weeds by the River City dump broke loose, tore a path of destruction through town, killed 17 people and the guy who came to town to change River City's, K-River forever.

In 1986 a floodgate opened, changing radio forever. The FCC rescinded the “Fairness Doctrine” which eliminated the requirement to broadcast “contrasting points of view” on American broadcast TV and Radio airwaves. A variety of radio hucksters, began preaching conspiracies and lies as facts, and paved America’s path to social division. The Death of Fairness is a story shining a spotlight on the impact of this decision that hits a little too close to home and is based on actual events. As a prophet for one of the biggest advocates to rescind The Doctrine, Program Director Fred Handson was sent to a small American city to replace the local hometown Disc Jockey’s on, K-River, the only radio station in town. Fred filled the airwaves with national radio shows, hosted by men who discovered a monetary payoff to espousing unsubstantiated facts, touting the new “freedom of speech” caused by the rescinding of the Fairness Doctrine, allowing lies and talk of conspiracies, without debate, resulting in tension and divisiveness in the town. Will the small town values of the community be jeopardized by this radical change with the local radio station?

33 years radio broadcaster/programmer, San Antonio, Washington, D.C., Baltimore and Miami. I was forced into retirement after a diagnosis of Multiple Sclerosis in 2005. I became a writer, my memoir, "Come Get Me Mother, I'm Through" and my short story, "The Death of Fairness" are my latest creations.

A businessman arrives at a local radio station to introduce programming changes, aiming at profits and giving preference to a single political perspective. The citizens begin to change, neighbors start to fight because of politics, and a fire-that was not previously reported by the radio-causes the population to turn against these content changes.

Yes, it reflects the book correctly. However, citing Reagan as the guilty one sounds delicate. The author could talk about the influence that the end of The Fairness Doctrine had on American citizens' lives as a historical fact, but not present it with a partial view of what is right and wrong. The book naturally makes the reader reflect on it.

It is a story based on a real historical fact, which gives it an attractive setting. The radio universe and the influence and relationship that citizens have with DJs are also fascinating.

Conflicts are repetitive—the author talks about the negative influence of polarized vision and fake news throughout the book. We could observe, with the use of actions, how these changes in content affected the population day by day, step by step. It could create an increasing number of events in the city that would make the situation unsustainable. As it is, it sounds repetitive.

The hook is the political decision that has affected citizens across the country. The hook is also the desire for capital gains that overrides the need to support the population.

If adapted, and if having a narrative development, I see the film as having a good chance of attracting a captive audience.

If the author leaves the final reflection on right and wrong at the end of the Fairness Doctrine to the audience, if the author develops the narrative, increasing stakes, conflicts, making the characters more consistent, and presenting the effect of the mass media on the population, day by day, this story has a chance of winning awards.

RADIO DAYS: THE STORY OF A FAMILY ASSOCIATED WITH RADIO HISTORY IN THE USA AND HOW RADIO HAS IMPACTED THAT FAMILY'S LIFE. A FACE IN THE CROWD: A RADIO PRODUCER PUTS A CHARLATAN ON THE AIR, HE GAINS VISIBILITY, AND BEGINS TO SUPPORT A PRESIDENTIAL CANDIDATE FOR HIS OWN BENEFIT

There are not many audiovisual products on the effects of the end of The Fairness Doctrine. Also, using a microenvironment to talk about a universal fact, showing the impact of this decision in the country from a small town's perspective, is a differential that makes us even closer to the topic.x

The characters could be better developed. The antagonist sounds too villainous, and putting all those DJs in one package seems like a negative choice for the story. Each DJ has unique characteristics, diverse fans, talks about specific subjects and could be used properly to elevate the plot's conflicts. With each new dismissal, a new conflict and a new narrative could be initiated.

It is not a rare gem because it has structure and narrative problems; however, the theme, the base story, is quite interesting and could convert into a good audiovisual product.

The narrative sounds repetitive. We learn from the beginning that the local radio was very well-liked by the public, who stayed informed by this mass media. We also promptly discovered that this businessman arrived in the city intending to transform the local radio into a system of earning money, spreading political untruths favored by the end of the Fairness Doctrine. Since the beginning of the book, we have known about all this, but the author frequently repeats this information throughout the book. It is an unnecessary tool here. It would be much more interesting if we saw in narrative actions how these gradual and slow changes began to affect citizens' daily lives and change their thoughts and relationships. The characters could have unique voices. We are talking about radio DJs, and clearly, each one has a specific audience and different characteristics. Using these individual and local "voices" to compare and confront the effects of global (and more generic) communication, which takes away each city's individuality and gives the whole nation the same type of approach and the same source of information, would be an exciting way of presenting the theme. These characters need to be presented as individuals, as unique beings, with dreams and personal ambitions. They are all arranged in a single package, which greatly undermines the image of "local" versus "general." The population is also placed as a character here, but a unique character. If we had the chance to properly see these people, as some personalities were directly affected, we could better understand the situation. The author presents the businessman's side and the dismissed DJs' side but says little about this population directly affected by the Doctrine's end. It would be more appealing, and the story would feel more complex if the characters could have different voices. The villain is very evil, the population is put in a single bag, and the DJs sound very similar. Dialogues and narrative structure also need improvement. The positive point is that the author worked for radio stations and would know how to talk about that environment and these characters. The subject chosen by the author is fascinating. The radio, a universal mass media, also gives a sense of proximity to the subject. He would only need to make adjustments to the plot, structure, and characters to make the whole thing more relevant.