The Inbox (A short Story) 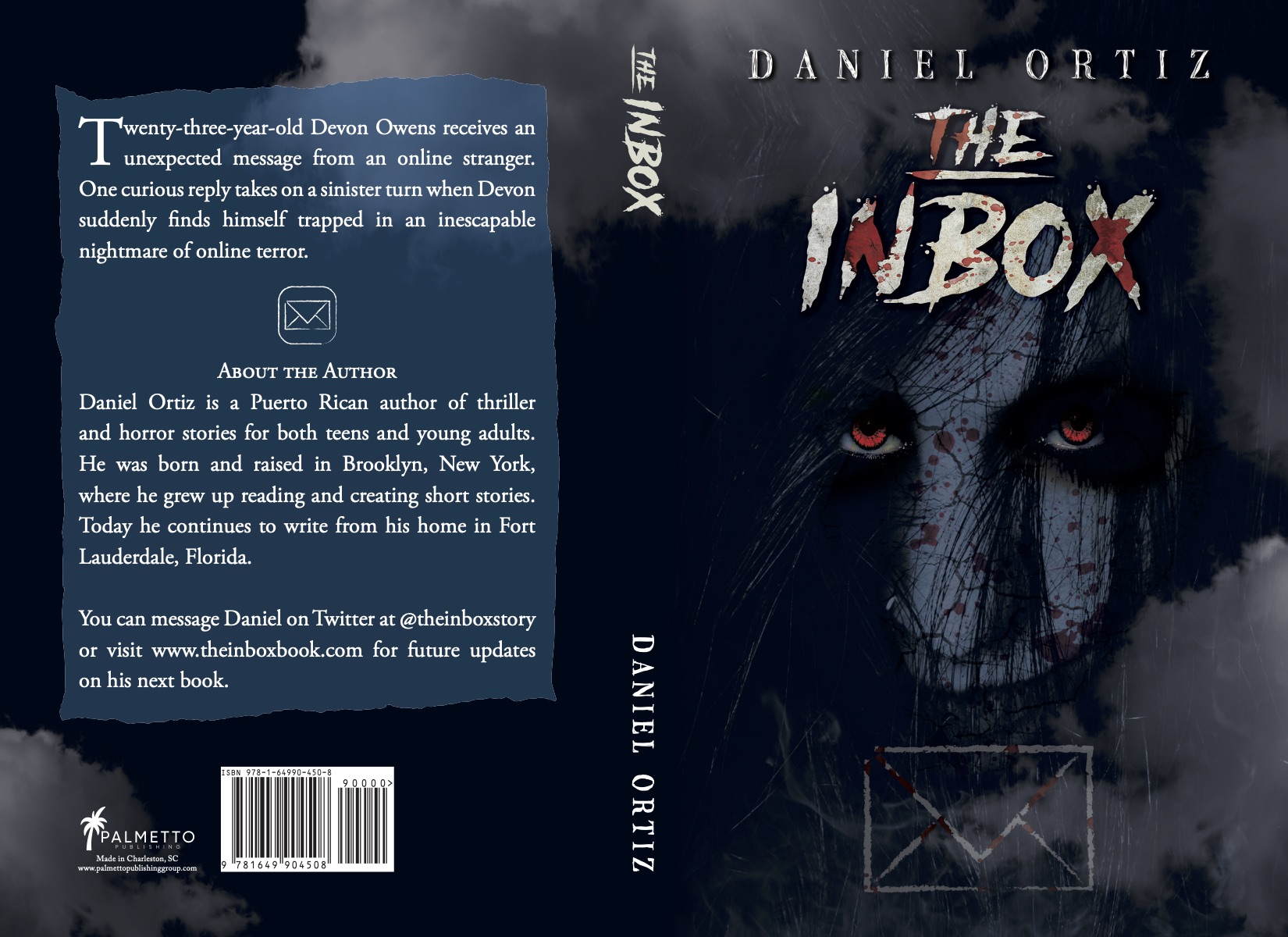 In this dark, suspenseful thriller, Twenty-Three-year-old Devon Owens sets on a journey of self-discovery over the internet. He receives an unexpected message from an unknown stranger. What starts as a seemingly curious reply soon turns into something far more sinister.

Twenty-Three-year-old Devon Owens, embarks on a journey of self-discovery as he sets out in searching for a new life over the internet. While trying to find his own place, he receives an unexpected message that unfolds the online world’s unusual and darker side.


Devon Owens begins to fight for his soul from an evil presence he encountered online. Will he succumb to its impenetrable darkness or break free from its grasp?

“The Inbox” is an ominous chill that lurks beyond each page. This young adult horror novel is the perfect modern-day thriller leaving audiences to think twice before opening their inbox. Today's generation depends on the web to do just about everything. The Inbox highlights that not everyone is who they say they are over the internet. With surprising twists and spine-chilling moments, this is one story thriller/horror fans are going to love.

Author Daniel Ortiz is a child of the '90s born and raised in Brooklyn, New York, where he grew up reading and creating short stories at a young age. He credits the popular Goosebumps series for influencing his work and style today.

Young Devon has an ordinary life: he studies, lives with his parents, he has friends and a beautiful girlfriend, Samara. One day, he decides to live together with Samara, and starts looking for a new home. However, a strange real estate agent begins to stalk him and puts his relationship with Samara at risk.

The story begins by presenting the typical life of a young man. However, it begins to entertain more from the moment the antagonist appears. By the initial email exchange, we believe that Belladonna can be a stalker, making the story more thought-provoking.

Some actions don't make much sense. If Belladonna is a vampire who just wants to drink Devon's blood, why would she bother to destroy his relationship? Of course, the situation causes conflict, but it doesn't make much sense in the end. Samara and Devon's relationship is also a little strange. An offensive message from Devon appears on Samara's social media. She breaks up with Devon, but after a short while, she goes after him, and without demanding a further explanation about the case, she forgives him for simply knowing that he was about to ask her to marry him. I understand that she is in love and that a marriage proposal means a lot, but they needed to talk about it.

The hook is the feeling that grows in Devon when he starts to be stalked. He seems to be a well-prepared young man for life, but when he feels watched, he loses his mind.

I don't think so because the story seems to deal with the subject superficially. It would need more narrative elements to attract a wider audience.

If the story explores the side effects of being stalked in a more dramatic and profound way, It would have the potential for awards. If it stays in the sphere of horror without using more dramatic resources, I don't think so.

VAMPYRES: TWO VAMPIRES ATTRACT PASSERS-BY TO IMPRISON THEM IN THEIR MANSION AND DRINK THEIR BLOOD. YOU: A MAN DECIDES TO STALK WOMEN AND TAKE THIS “HOBBY” TO THE LAST CONSEQUENCES

Belladonna attracts men to her apartment by posing as a real estate agent. It is an original characteristic, however I believe this game of hunting, stalking, pretending to be another person, flirting with Devon could be further developed.

The characters fulfill their roles as part of a horror narrative. Devon is a good, loving, exemplary guy; Samara is a strong and beautiful girl; Devon's friend works well as a sidekick, and Belladonna is a sexy and cruel vampire. Therefore, each character fulfills his role within the narrative, but to enrich the audience's experience, they could be a little more complex.

It is not a rare gem. It has the potential to entertain as a horror material, but it requires more narrative elements to reach this level of excellence.

The story of this contemporary vampire living amid society and posing as a real estate agent to suck the blood of boys is a good one. It is a good start for an intriguing horror story. However, the story ends up having a brief and straightforward arc. Although Belladonna is one of the most intriguing characters in history, she does not show up until the end of the narrative. We could get to know Devon better, who this protagonist is, what he is like, how long he has been dating Samara, their relationship, and his longings and fears. Devon's relationship with Belladonna had a lot to offer, but it comes down to a few minutes that happen only at the end of the story. The public waits for their meeting, and if that meeting took place earlier, it would be more satisfactory. Since we have this girlfriend hurt by a misunderstanding, why not intensify this conflict by making Belladonna closer to Devon and more flirtatious? Why not build a relationship where Devon could feel confused, and in the end, realize, before Belladonna proves to be a vampire, that Samara is the one he loves. The author creates the "breaking up" conflict between Samara and Devon while Belladonna approaches him little by little. However, none of these opportunities are taken advantage of. Samara forgives Devon before even demanding an explanation from him, and Belladonna shows her cruel and hideous face on the first date. The story seems to plant a series of situations that never pay off. For example, Belladonna initially looks like a stalker, which generates tension in the audience to know who she is and her plans with Devon, but the stalker side is not taken very far. She calls him a lot and sends many messages but doesn't chase him, so the stalking promise ends up being more robust than what we actually get. Ok, she is a vampire, so she cannot show up in the middle of the day, but the author could use this nocturnal characteristic as an opportunity to create. In addition, it doesn't make much sense for her to use technological devices if she also uses supernatural powers and black witchcraft. These are small details, but they make the story more coherent and more credible, despite the fantasy level of the story. The author had a good idea, however it lacks elements, conflicts, more remarkable character development to make the narrative more complex and robust.