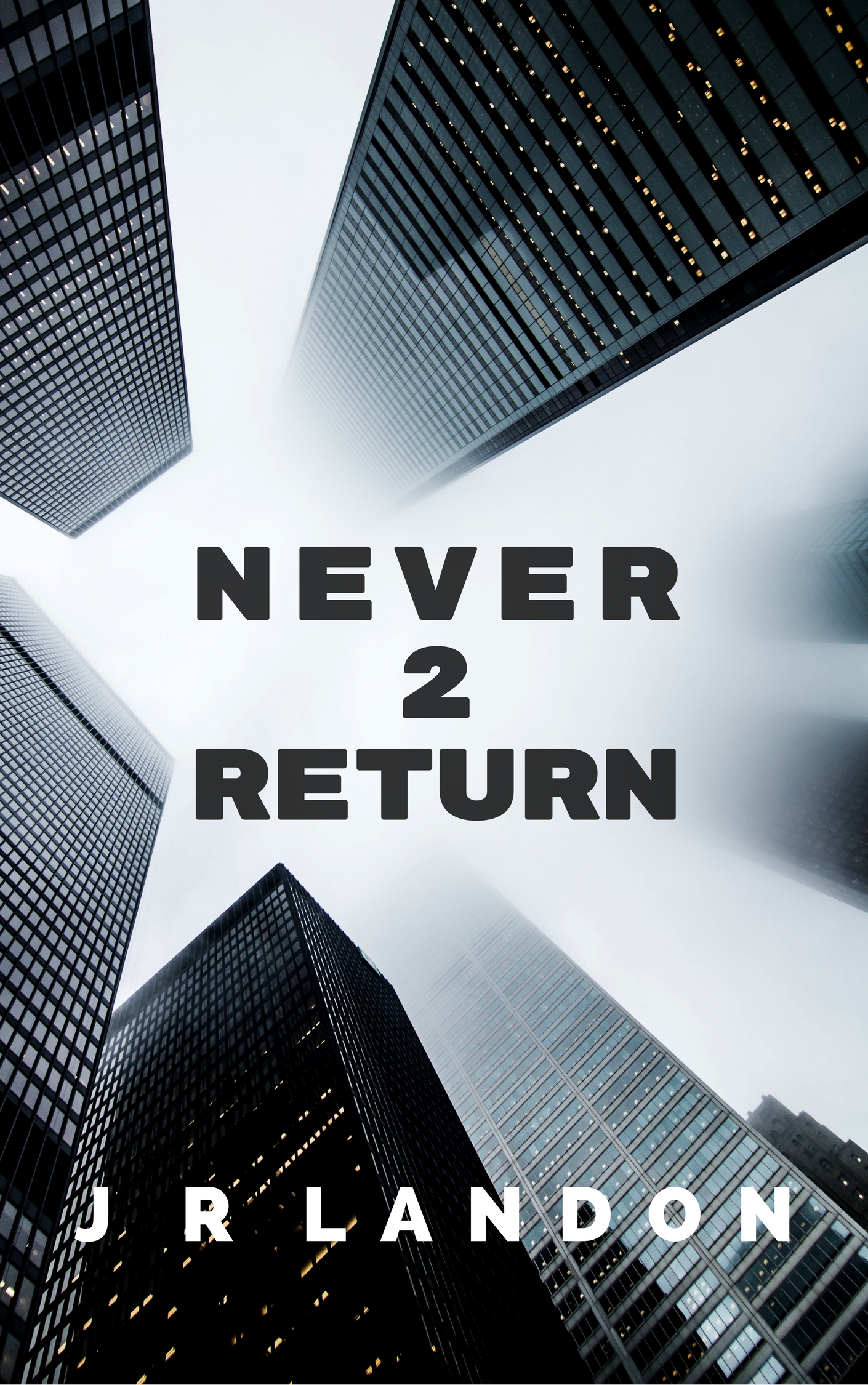 Max Duncan must change his identity and travel to New York to commit a bank heist using a sophisticated computer program and the assistance of a local US gang. Surprises, romance and a miriad challenges await.

Dennis Buchanan dies prematurely, leaving a mountain of debt and a secret computer program that he bequeaths to his nephew, Max Duncan, that will enable him to retrieve stolen possessions from Dennis’ unscrupulous US business partner and ease the pressures on Dennis’ family.


Max has endured the most rigorous journey to retrieve £2m-worth of diamonds. (Spoiler) He succeeds, but we don’t find out until the final minute of the story.

N E V E R 2 R E T U R N is a fast-paced adventure set primarily in New York. Max is a computer nerd who inherits a secret program from a dead relative with the challenge to use it to rob a bank vault to repossess a stolen diamond collection within a tight time-frame. Using the services of a local gang in New York. As if this is not enough of a challenge, there are other forces set against him that he will only discover when he embarks on the journey. Max prepares with all his skills as a former military operative, but he could not anticipate the romance, double-cross, his fifteen minutes of fame or his encounter with the diamond thief that present an obstacle course worthy of his military training. Reviews of the book make reference to the twists and turns, the fast pace, the characterisations, Max’s personal journey arc and the page-turning surprises in the plot. And several have suggested that NEVER 2 RETURN will make a great TV miniseries or feature film. Naturally, I agree -- and would love the opportunity to prove it.

John lives and works in London, UK. He has worked in the creative industries and written all his adult life. Scripts, advertising copy, business paraphernalia - and now, two published novels. John has adapted his first novel to a TV miniseries that is currently under consideration at the BBC in UK. NEVER 2 RETURN is John's second novel, set at the end of the 1990’s with a pace and complexity that should make it ideal for adaptation to TV or a feature film. John has other commercial TV projects in development in UK.

Max Duncan receives as an "inheritance" from his uncle a sophisticated computer system and the coordinates for the invasion and theft of a bank. After many challenges and moments of high tension, Max comes face to face with the real enemy, but manages to escape with his uncle's inheritance, which his partners had stolen.

The story already begins with action and tension, with Max having to undergo a problematic experience. We start seeing Max right off the bat, which is crucial for this genre.

Some scenes are enigmatic, raising confusing information - common to the genre - and various characters are introduced, making the narrative a little complicated and tiring.

The hook is this inheritance from a loved family member, which can make Max a rich man, but also puts him in a dangerous scheme. Despite being an ordinary man, Max sees no choice but to accept the inheritance and seek revenge for his uncle. It is a mission that brings tension for its dangerousness and also carries an emotional background.

Action fans can find attractive tropes of the genre here. If the emotional side related to his family could be elevated to a more dramatic narrative, the story could attract an even larger audience.

No. It is an action film that entertains through the tropes that are typical of the genre and touches us because of the emotional facet of the heritage, but it would not be a dramatic enough narrative to win awards other than the most technical ones.

MONEY HEIST: A GANG PLANS THE HEIST FOR THE ROYAL MINT OF SPAIN. OCEAN’S EIGHT: A GANG’S MISSION IS TO STEAL VALUABLE JEWELS

The most original characteristic here is that the heist is an inheritance from Max's uncle and that it ends up putting the protagonist on this dangerous journey.

Max is an ordinary guy who works as a very skilled tech technician. He is inserted into the world of crime abruptly but keeps his more peaceful and compassionate style, even in the face of dangerous people. He is a character that the reader sympathizes with. The others work more as support characters for Max, but it is worth mentioning Bo as a good sidekick. He leads the gang in New York and is the one who assists Max in the heist. He is a character better prepared for crime than Max, but he is also empathetic.

It is not, since we have many films with bank heists and partners who steal from each other. What makes the whole book more original is that the entire crime was planned by someone who leaves the planning and execution of the crime as an inheritance for a family member.

Max is an ordinary man who ends up being thrown into crime. This is a good start but also risky because it can turn Max into a more passive protagonist. He goes in search of what he wants, but the risks of not getting it are not that high. The uncle is already dead, and Max is not ambitious enough to look for diamonds. When we follow the story, we have the feeling that if he fails the mission, that's fine. Nothing terrible is going to happen. He will continue to live his simple life, and nothing bad will happen to his uncle because he is already dead. Increasing stakes would be an excellent way to generate more tension. If money doesn't matter to him, he needs to get into crime for a specific reason. The uncle's inheritance is a good start, but something even stronger and more powerful should be the reason to take him to the world of crime. He is a highly qualified technology technician, so the mission could be an invitation to test his skills or something he wanted to prove to himself. The author could also include more internal conflicts. He is a man who analyzes things a lot, suffers from the death of his uncle, worries about Molly, but he could have more internal conflicts related to his entry into the world of crime. The villains are not at the same level as Max and his gang. It is a problem in action films. If the villain appears to be less dangerous, the tension is also reduced. Both Tessa and Jack don't look too scary. Jack seems to be an antagonist even too moderate, and Tessa, who turns out to be the greatest villain towards the end of the story, also ends up not bringing much danger or difficulty to Max's group. She is easily deceived, by the way. Developing villains and making them more clever, competent, and ambitious could make the whole story more appealing. The idea is good; the crime left as an inheritance is an excellent starting point, but extra elements and further narrative development could make the story stand out.