A Heart on the River 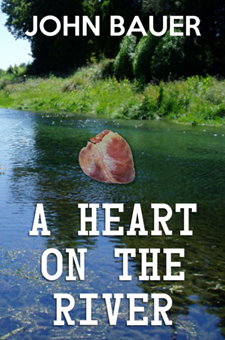 No jingle bells nor singing reindeer in this Christmas story! Take a 3-day journey with Fred Woody, Jr. to an Atlantic City casino. He relives his personal misdeeds and pushes through many road bumps with folks he encounters, both human and other-worldly. Discover a heart or two on the river.

Winter. 2011. A soft-hearted curmudgeon deplanes in Washington, DC after a 14 hour flight from the Middle East. His only objective is to play in and win a multi-million dollar Texas Hold 'Em Poker Tournament to be held on Christmas Day. He experiences a pulmonary embolism and is felled...


Early morning. After Christmas. Protagonist/anti-hero finds himself "heads-up" at the final table against a soldier/friend/life saver, deciding whether his lifelong poker obsession should be achieved or not?

You will not find another other story which combines a Christmas-time pilgrimage, a middle-aged white man's re-birth, and high stakes poker, juxtaposed against Iraq and Afghanistan war flashbacks. The internal and very real struggles of the anti-hero-Fred Woody, Jr.--are what each of us faces in our daily lives. The originality of the novel will move the reader. When the movie is made from the book, comparisons will be made as to which medium best presents Fred's journey. The metaphysical/religious element will both draw folks to the book/theatre as well as create controversy. God talks to each of us in His own ways. Fred discovered God's messages during his sacrilegious mission. The double entendre of "A Heart on the River" will be embedded in every reader's psyche after reading the novel or leaving the theatre.

Well before he ever wrestled with words, John Bauer read, worked, loved and won more than he lost. In 2007, he was fired as county manager for no good reason from a place he’d previously managed for six productive years. He proceeded to mistitle, and under-achieve with a textbook/cathartic memoir—boats, knots, other things. Undaunted, John sold health insurance and stocks and bonds, and then served five (5) twelve (12)-month tours in Iraq and Afghanistan as a Senior Governance Advisor for the US Department of State. Since 2013, he has published several short stories. In August 2020, his second novel--All the Bay's Clams and All the Bay's Men debuted to positive reviews and has garnered a "Consider" from TaleFlick. His genres are adult contemporary, dark comedy, farcical, horror, erotic, and non-fiction. A believer in pre-destination and Divine Providence, John opines his stories' endings are not entirely his own. Born in Brooklyn, and raised on Long Island, New York, where he dug clams for eight summer seasons, John was schooled at Notre Dame and Syracuse, with detours to Mexico City, Mexico, Raleigh, NC, and Little Rock, Arkansas. Since 1979, he has worked as a public servant in southeastern North Carolina. There, he and his wife raised three children and currently have six grandchildren. Oldmanwrite—website and brand—reflects by any quantitative measure, John is old.