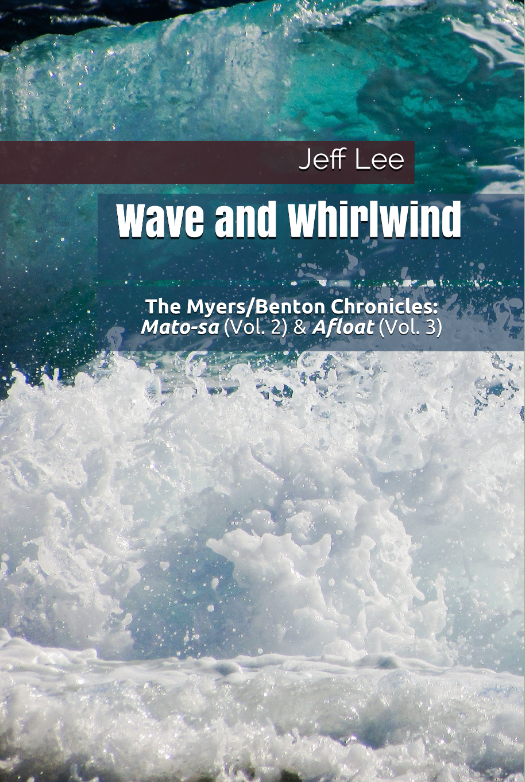 In 1955, Karl Myers heads west to find his long-lost wife, and encounters a prison break, unresolved murders, his wife’s bigamy, and a son he never knew--Bill Benton--who sails to the South Pacific with a brilliant and beautiful young woman who is escaping the shame of an unwanted pregnancy.

Prison escapees stumble upon Karl Myers in a N.D. saloon; he kills one & subdues the other two before he runs off to avoid being entangled in what's happened; while standing alongside a N.D. two-lane at night in a self-destructive funk, there is a chance encounter with an old friend.


As Karl Myers and his friend's widow, arm-in-arm, look at the night sky at Fort Worden; Bill Benton, helming a 60-foot-yawl headed for Pape'ete, stares at the stars and thinks about the young woman who waits for him below with open arms.

The Myers/Benton Chronicles detail the lives of Karl Myers and his son (Bill Benton). TaleFlick entries “The Innocents” and “Pinctada” bracket “Wave and Whirlwind,” which begins with Myers in 1955, having failed as a police chief, headed west in search of his wife (Laura Benton) who ran off in 1939 because she blamed Myers for the accidental death of their daughter in Baltimore. Myers heads to Port Townsend, WA, where Laura was reportedly last seen. Along the way, Myers encounters a prison break and captures an escapee (Mato-Sa). In PT, Myers finds Laura who, despite still being married to Myers, has married a wealthy Seattle Surgeon (George Murdoch). Myers also learns Laura had been pregnant when she left Baltimore and that he has a son (Bill Benton). Myers’ arrival disrupts Bill’s ordered life, ends Laura’s marriage to Murdoch, and shamed by her betrayal, Murdoch commits suicide, for which Bill blames both Myers and Laura. A beautiful and brilliant fellow student of Bill’s (Bambi Macey), fearing she is pregnant and the shame it will bring, and sensing Bill is unhappy, entices Bill—even though he is not the father—to sail her away from PT in Murdoch’s yawl. During this time, Myers becomes involved with solving two murders and a kidnapping, all of which are the doing of Mato-Sa who, serendipitously, was released in a federal witness protection situation in PT shortly after Myers’ arrival. When Bill and Bambi are last seen, they are at sea, headed for Hawaii.

I have 8 self-published novels available, including 6 that currently comprise the Myers/Benton Chronicles (more to come); my novels fall within the genre, upmarket, historical noir. For more info, visit: https//www.jeffleenovels.com.

After 16 years, Karl Myers returns to his old town to meet his ex-wife. but ends up encountering a son he never knew, some mysteries, and a new person to love.

There's action from the start, in which the protagonist sees himself in the middle of a prison break. The dialogue is also interesting enough to catch your attention.

It's very long and, sometimes, the book sounds repetitive. Despite precise lines, the book has too much dialogue.

The hook is this transformation of life the protagonist encounters when returning to his "old history."

The book is nicely written, and the story development is complex, but I don't believe the story is catchy enough to have a large fanbase.

It has a dramatic approach (the changing of life certainties) mixed with a historical side that could give it some Awards potential.

GARDEN STATE - AN ACTOR WHO RETURNS TO HIS OLD TOWN AND HAS TO DEAL WITH HIS PAST. SWEET HOME ALABAMA - A WOMAN WHO LIVES IN NY, RETURNS TO HER OLD TOWN TO TELL HER PARENTS SHE IS GOING TO GET MARRIED, BUT HER REAL INTENTION TO RETURN IS GETTING A DIVORCE FROM HER FIRST HUSBAND

There's nothing highly original about it, but I believe the writing style gives the story a fresher look.

None of the characters are perfect. All of them have flaws, and it makes them more credible and engaging.

Not a rare gem, but there's a good drama behind the historical facts, and it's nicely done.

It's not completely original, but I believe the writing style is what makes the book stand out. The author knows how to tell a story, how to make people think about the subject, and how to connect the book's story with our own story. The drama of this man that returns to his "old life," and ends up facing the truth that this life no longer exists is engaging. This protagonist is a flawed man who is trying to do the right thing, despite his lifestyle and characteristics. The book is part of a series, so there's a good chance for a franchise. The characters are compelling since all of them have made bad choices in life, and it makes them more real. The dialogue is good. I just believe that there's too much dialogue in comparison to the amount of action. It could be more concise. Overall, it's a nice book, that has the potential for more if further developed in terms of structure, conflicts, and narrative.