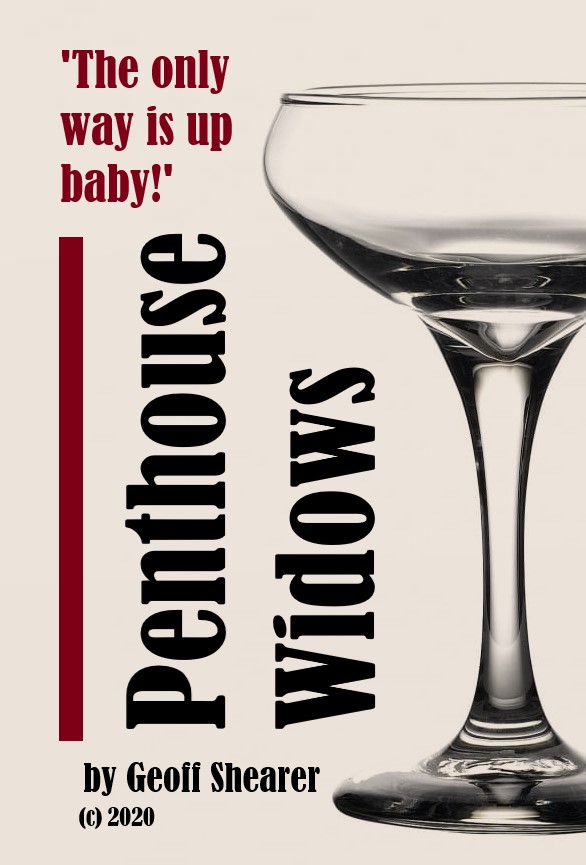 Three wealthy but desperately lonely widows start a high-class male escort agency beside the bronzed beaches of the Gold Coast in the crime-ridden and synth-pop-drenched 1980s.

After her filthy, cheating husband "dies" in a boating accident, Monica Lessing moves to the Gold Coast and into the penthouse he left her. She and a rag-tag group of friends decide to launch a high-class male escort agency "Peacocks" to service the Coast's lonely widows.


A local brothel, corrupt cops and underworld figures want their piece of the Peacocks profits. Along with them, Monica deals with an alcoholic girlfriend; a daughter who despises her; a romance with an escort half her age … and a husband who refuses to die! Ending in a shootout during mardi gras.

TRUE STORY … In the mid-'80s, rich Australian businessmen from Sydney and Melbourne "installed" their money-squandering wives in penthouse apartments across the Gold Coast. Not only did it allow the women a lifestyle of opulence and diversity, but it gave the husbands room to move - to drink, gamble and take on as many mistresses as they could handle. When the wives started seeing less of their husbands, who dropped their weekly weekend flights up to the Coast to fortnightly, then monthly ... they became known as Penthouse Widows. Eventually divorcing, many kept the Coast penthouse as part of their property settlement. (Similar scenarios undoubtedly happened in Miami USA). ALSO TRUE … One enterprising businesswoman took advantage of these lonely widows by starting a male escort agency. She charged the widows $500+ to go on a date with handsome hunks. NOT SO TRUE … After her filthy, cheating husband dies in a boating accident, Monica Lessing moves to the Gold Coast and into the penthouse he left her. Realising she is surrounded by other lonely widows and divorcees, she and a rag-tag group of friends launch a high-class male escort agency. Recruiting uni students and surfer boys, it’s a huge success … until a local brothel, corrupt cops and underworld figures want their piece of the profits. But Monica will also have to deal with an alcoholic girlfriend; a daughter who despises her; a romance with an escort half her age and a husband who refuses to stay dead!

Journos joke that you shouldn’t let the facts get in the way of a good story. But in creative writing, years of building up facts through life experience shapes a writer capable of delivering twists, surreal deviations and a luge-like speed to a narrative... Geoff Shearer has been a titan in the News Limited editorial team since joining in 2000 – working a suite of senior positions such as Night Editor, Opinions Editor, Deputy Editor & Senior Writer for U on Sunday Magazine, and Entertainment/TV Editor which saw him travel globally to interview celebrities and spend time on the sets of some of the world’s biggest shows. The former TV WEEK Features Editor and Columnist, was the only Australian journalist to be granted a one-on-two exclusive sit-down interview in LA with Steven Spielberg and Tom Hanks in 2010 for The Pacific; and also was selected for exclusive interviews with Glenn Close, Billy Connolly, Ewan McGregor, Ricky Gervais, Anjelica Huston, Jeff Goldblum and more. Swanning about with the Downtown Abbey cast in London; lunching at Chateau Marmont; or sharing an iced-tea on a warm autumn day on Long Island NY with Christina Ricci and Margot Robbie on the set of PanAm, Geoff has had all the tough gigs really … With multi MEAA Clarion Awards and News Awards wins for his writing and editing, Geoff now infuses his creative writing with the worlds he has been privy to; and the inside secrets that only he knows. His recent projects included a major national TV network drama series in early development with a leading production company. He is also in talks with a major broadcaster on a reality TV series concept which was a finalist in the ABC TV Factual Format Initiative as part of AIDC 2016 in Melbourne. Geoff is also lead writer in a team of three developing a feature film script (action/drama) for a rising Australian director. Among his growing slate of literary work are three completed novels; several short stories; and seven (possibly more) novels in various states of construction, renovation or disrepair.