Sempre Amore: A Tale from The Land of Milk and Urine 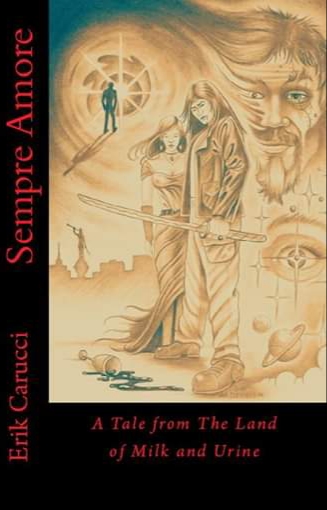 A young Immortal discovers there's a price to pay for everlasting life. His greatest love and their city face threats from others of his kind. He is confronted with the challenge of towering above his gore soaked beginnings to finally embracing his cosmic birthright.

Tiberius is an Immortal living in the bloody shadows of Troy. He dispenses justice and salves his cravings upon streets of darkness. All the while, he yearns for acceptance and love. Finally, he emerges into our world for the heart of a woman. Bloom turns to frost, when the family comes to town.


Tiberius discovers brutal truths previously unknown. To save his enigmatic and lost creator, he must engage in a contest already decided by fate. With no hope of victory, Tiberius must fight on for his love and all of creation. Regardless the outcome and impact, his ascension has already begun.

This a book that is perfect for the Hollywood treatment! A dark fantasy with action, intrigue, and suspense. It's a sci-fi and horror hybrid that is fresh and engaging. With a new take on vampirism, universal consequences, loyalty, and sacrifice, it will wow audiences and critics alike. Think, vampires as nonage beings with the possibility of ascension to empyrean godhood. With a deep mix of fact and fiction, It can be easily converted into a movie as well as a series. We have Tiberius, a young reluctant Immortal, who dispenses justice and quenches his thirst with the evildoer's blood. All the while, he craves acceptance and love. Enter Beth; a strong and decisive woman who's had a hard life but always gets back up after a knockdown. Tiberius takes a job to get closer to her and they begin to walk a new path together. However, their happiness is soon tested by his "family". His demented brother Ivan is in town to kill their maker and unravel the universe. The creator is an enigmatic cosmic enforcer known as Deth. Deth was a contemporary astronaut that was transformed and sent to the early universe. He is unhinged and beyond mortal restrictions. Despite his vast abilities and travels through time and space, he needs Tiberius to step up and end his brother's mad quest. With the help of his mentor, Alexander the Great, he hopes to end this demented enterprise, discover his birthright, and find true love with Beth.

Erik Carucci is a hard working character from Troy, New York. Born with an uncanny sense of self and the need to strike fear into the hearts of evildoers. He struts across his native land with power and grace. Erik lives in the heart of the city; a living example of what Troy's all about.

Tiberius is a vampire that has been living in Troy for the last 60 years. He gets caught up in some nefarious dealings where his girlfriends is severely hurt. His sire, Deth, returns with shocking revelations of Tiberius family, time travel and how his grandson insures the survival of Earth and other dimensions. Tiberius realizes his immortal life has a greater purpose than he originally thought.

The story begins with Tiberius' daily routine as a vampire. Vampire stories evoke curiosity because there are many ways you can explain their origins and their life as immortals. The book includes many fantasy and sci-fi themes. Tiberius is a vampire, one of only 6, that he is aware of. He meets Deth, the immortal who turned him into a vampire, but who also travels through time. Deth introduces him to the concept of other worlds, dimensions and timelines. This is an interesting combinations.

The book is not formatted correctly, making it difficult to read. The dialogue is also formatted incorrectly. There are thoughts and dialogue mixed in throughout that are not designated to any character. It is left to the reader to decipher it. The dialogue does not stay constant with the characters.

The hook is that Tiberius, a vampire, must help his grandson accomplish his goals to maintain the timeline of the universe. Vampires jumping through time and space is an interesting combination of genres that hasn't been seen much before.

This could have a large fanbase if the story is revised. Currently, it is a jumble of ideas not executed well. Fantasy characters tend to have a draw and vampires are a classic, familiar character that can be built upon in many ways. This story ends on another planet, in another timeline which would elevate this story and any sequels.

This does not have awards potential. The characters feel like caricatures. The author's voice comes through instead of having a distinct voice with character development, especially with Tiberius.

The story is not very original. There have been many vampire stories done before. This story deals with time travel and other dimensions. It only touches on it because Tiberius needs to aid his grandson so that nothing changes in the timeline. It is set up for further development in future stories. If that were brought in earlier to begin with, that would make it more unique.

The lead character doesn't stand out. He does not have a distinct voice or personality. Tiberius sounds like the author's idea of a cool character. It is a random mix of things that don't create a distinct character.

This is an average story that could be developed into something better. The dialogue and writing take away from the story greatly, but there are elements that could make a great story. Tiberius learns there is a greater world out there and he has more power than he realizes. His girlfriend is turned into a vampire by Deth and they look into eternity together. Deth has been jumping through time and space to maintain balance. There are many themes to play up but it needs to be constructed concisely.

The dialogue needs to be reworked. The author tries to do an inner monologue throughout the story but it's disjointed. Tiberius needs to be refined. He is the main character and an immortal vampire. He exudes 20 year old dude which feels odd when he helps is 40 year old grandson.