NEW IN TOWN: The Mostly True, Mostly Regrettable Tales of One Man’s Desperate Attempts to Have Sex and Find Love (but Mostly Have Sex) in LA 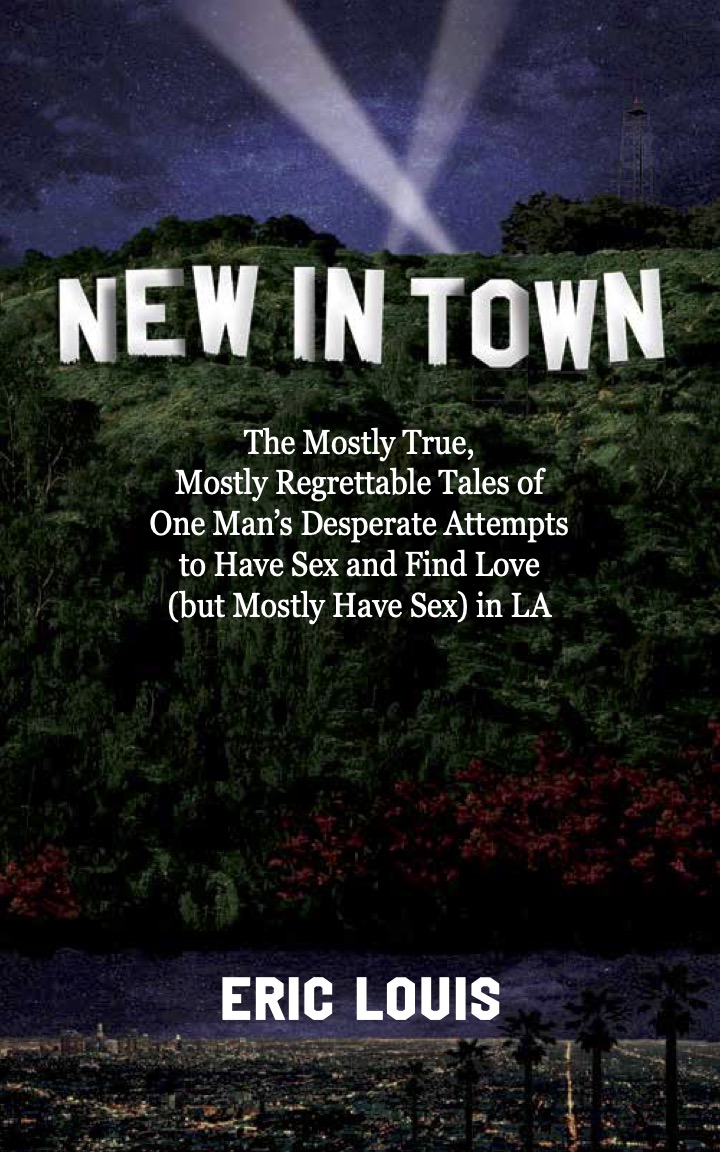 It's my story back in the 1990's when I first moved to LA as a 20-something struggling actor and spent my time drinking, meeting women, and occasionally pursuing my craft. New in Town is a cross between Californication and Fleabag with a fair amount of sex, weed, and self-deprecating humor.


The book contains a number of self-contained stories, and builds towards my eventually meeting a wonderful woman, stupidly breaking up with her, and then ultimately reconnecting, falling in love, and getting married.

“NEW IN TOWN: The Mostly True, Mostly Regrettable Tales of One Man’s Desperate Attempts to Have Sex and Find Love (but Mostly Have Sex) in LA” is my story back in the 1990's when I first moved to LA as a 20-something struggling actor and spent my time drinking, chasing women, and occasionally pursuing my craft. It’s a cross between Californication and Fleabag with a fair amount of sex, a little bit of weed, and an abundance of self-deprecating humor. Call it a boy meets girl, and another girl, and another girl, and even that girl's cousin kinda story. Audiences will love watching the movie unfold as the story builds towards our hero eventually meeting a wonderful woman, stupidly breaking up with her, and then ultimately reconnecting, falling in love, and getting married. They'll come for the hilarious dating shenanigans and Hollywood stories. But they'll stay for the heartwarming ending that no one could have predicted.

Eric graduated from Tufts University with a B.A. in English. His degree proved invaluable as he spent the next three years in Los Angeles as a bartender and wannabe actor. Upon reaching Hollywood’s pinnacle as a five-time champion on the daytime game show, Match Game, he had no more worlds to conquer. Therefore, Eric transitioned into an advertising Creative Director and Copywriter, crafting memorable campaigns for blue-chip clients such as Nissan, Red Bull, K-Swiss, and IHOP. When Eric isn’t curled up on a couch with a cold beer and his first novel, he can be found watching movies, playing softball, and writing bios in the third person.

Eric moves to Los Angeles and starts experiencing a new life full of sex and drugs until the day he finds Rose, a girl who will change him in many different ways.

Yes, but the logline could be written more attractively. The logline is the first contact the reader has with the author's work, and therefore very important.

The funny tone that the author uses to tell his adventures. It is a tone that matches the stories' content and the protagonist's style.

The similarity of the stories he tells. Some are interesting and distinct, but most are stories of him meeting a girl somewhere and trying to convince her to have sex. In the beginning, the stories' progression is good. After a while, it sounds repetitive.

The hook is the erratic life of a boy who only wants to have fun in his new town.

No. Despite the tone being attractive to a more juvenile audience, the stories do not bring anything much surprising or new to this old theme of the young man trying to have sex.

The story is very plain and simplistic to reach this potential. It is more a sequence of facts, as a form of a diary, than, in fact, a narrative full of events that could have the power to change the protagonist gradually and would walk towards a goal.

American Pie: Four teenage friends make a pact to lose their virginity. The Hangover: Three friends go to Las Vegas for a friend's bachelor party and live the craziest experiences there.

Eric's stories are not very original. A boy who always plays the same trick to try to go out with girls, ends up involved with the police in hilarious situations and in the end, finds love. To become more unique, the author could make use of more turning points, more unexpected lines and actions, and extra narrative elements to make the story more attractive and less obvious.

Eric is a likable protagonist, but with some problems. He treats women badly, goes out with them exclusively for sex, and does not regret what he does even when he notices these girls are hurt. This is a problem for any protagonist. We need to understand the reasons that led the protagonist to take bad actions in order to embrace him, and Eric's only reason is the urge to have fun. There is no outrage in that, but as soon as it hurts others, and we feel no remorse or any kind of change in this character, the spectator tends to let go of his hand. The ideal would be to develop this character better so that he could experience certain internal conflicts and shows human flaws, so we could create more empathy.

It is not a rare gem. It's a typical "teen trying to get laid" movie. To achieve more strength, the book could have a more diverse and interesting sequence of events.

The author has a very funny narrative style, which perfectly matches the type of story he wants to tell. However, this pleasure brought on by a more ironic mood is lost the moment the actions start repeating themselves. The beginning, although cliché, is pleasant to follow because it delivers new character elements, such as the use of the catchphrase "I'm new in town," and his 'hunter' behavior. However, after some different women he attracts, the story loses strength, because everything follows in a very straight and similar way. The cop's scene brings an interesting comic relief, but soon after we are again thrown into a sequence of sexual experiences that always begin and end alike. Thematically increasing and decreasing actions could be interspersed so that the viewer could feel surprised again. The character's goal seems to get a little lost. At first, this goal seems to be "craving to have sex," but he ends up married and in love with Rose. As a turning point, it's an interesting tool, as a narrative structure, the action sounds too abrupt. The relationship with Rose seems very rushed. In the end, it seems that we have two themes: 'boys just wanna have fun,' and 'how life can change our desires.' If the second theme had been introduced earlier, the ending would have made more sense and would have made us more grateful. The character would also need to have more internal conflicts to gradually change throughout the story. It does in fact start inclined to a more negative side and end in a more positive direction, however this change from one to the other does not seem to have had the necessary gradation. He doesn't really seem to have really changed, he just fell in love with someone. The feeling we have, as a result of this rushed change, is that at the first opportunity, he may want to return to his old life, full of casual sexual experiences. Gradual change is essential here so that the ending makes more sense as well. It is a memory, so the author may feel a little more attached to his personal reality, however, as an audiovisual production, the adaptation could make use of some fiction to make this narrative move more cohesively.