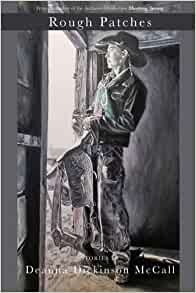 Rough Patches is a gritty collection of short stories about women living in the West, in both contemporary and historic times. They courageously stare down sexism, illness and unimaginable dangers. The women push on, armed with the hope and fortitude that has long defined the West's women.

Cistern: A woman photographing the area is kidnapped by a mentally ill man, known as Crazy Jack, and kept in a cistern when he leaves the ranch. She is tied up and made to dress in decades old clothing. Unknown to her, a boy is dared to sneak onto the ranch and sees what is going on.


The woman finally decides to risk escaping when Jack is loading cattle on a cattle truck. The boy has finally told his parents and the police what he has seen and the truck driver is a police offer. She grabs a horse and is riding for her life, when the horse is shot before the officer can stop Jack

Name: Carolyn is a much sought after free lance photographer. She is single, grew up on a ranch, and finds strengths she didn't know she possessed.

Name: Jack is known locally as Crazy Jack. He rarely goes to town and local area kids are frightened of him. They believe he grows pot in a huge barn he keeps locked up.

Name: Joey is a young boy who is dared to sneak onto Jack's property, past Jacks vicious dogs, to see what Jack has hidden in the large barn

The story Cistern is the focus here, though I believe the other stories have great possibilities, as well. Cistern is a suspense story set in the modern West. It is written so one can easily see the scenes. This story, have a universal appeal and provides a break from the typical city crime/mystery show settings. I also believe that it being set in the West it provides an opportunity for wonderful outdoor scenes and the uniqueness of true, contemporary Western characters. This is a believable story, and the characters and scenes ring true. After I completed the book of Rough Patches it became a finalist for the Women Writing the West Award, the Willa. The judges asked if I would continue the stories in another volume. I did so, completing Rough Patches II. There is the option of continuing this story on film from the second book, as well. The sequel to Cistern has more twists and turns.

Deanna Dickinson McCall writes about the West with settings in both the past and current day. Deanna has cows, horses and a love of the land bred into her, coming from a family that began ranching in Texas in the 1840’s. She has ranched in several western states, including 22 years raising her family on a remote Nevada ranch without phones or electricity. She now ranches with her husband in the Sacramento Mountains of New Mexico. Her writing and performances have won numerous awards: The Will Rogers Medallion Awards, the Georgie Sicking Award, NM/AZ Book Awards, Women Writing the West, Western Music Assoc, The Academy of Western Artists, the Texas Poets Gathering Heritage Award, The Della Johns Scholarship, and The National Cowboy and Western Heritage Wrangler Award.

A collection of short stories about courageous women living in the American West, faced with everyday problems such as machismo and violence.

It does, but the author chose to detail only one of the short stories present in the book, so the profile could be considered incomplete.

The fact that they are stories focused on women in an environment generally considered to be dominated by men in popular culture.

Nothing made me want to stop reading, but, as in most short story collections, some of them are less interesting and eventful than others, and, therefore, considerably less compelling, though well written.

These are stories that bring to light relevant and contemporary themes, such as machismo and domestic violence, putting strong and determined women ahead of events, overcoming obstacles through their own intelligence and expertise, without the need for intrusive male help.

It is possible that an adaptation could attract a large and mainly female audience that is interested in stories that go beyond clichés and challenge commonplace through strong characters having to live in a primarily hostile environment.

Depending on the quality and experience of the team behind and in front of the cameras, an adaptation may indeed draw the attention of Awards voters. The original material is different and interesting enough for that.

CERTAIN WOMEN - THE STORIES OF FOUR WOMEN LIVING IN THE WESTERN STATE OF MONTANA INTERTWINE AS THEY LIVE THEIR EVERYDAY AND VERY DISTINCT LIFE. MEEK'S CUTOFF - FOLLOWING THREE FAMILIES OF LOST TRAVELERS IN THE WILD WEST, THE FILM STRESSES THE IMPORTANCE OF WOMEN'S PARTICIPATION IN AN ARID AND HOSTILE ENVIRONMENT.

The most original aspect of these short stories is the way in which they emphasize the experiences and the inner life of their protagonists in such a way that great conflicts and apparently unimportant events almost always sound interesting to the reader. To make them even more unique, perhaps there should be even more unnerving and compelling conflicts.

They are courageous, hardworking women who, placed in an environment that traditionally was not considered theirs, are able to prosper and stand out.

Not a rare gem, but it is a book that stands out due to its main theme and the quality of its writing. With a few minor changes, even deeper dives into its characters' psyches, and some additional suspense, the book could indeed become a rare gem.

First, the book needs to be considered for adaptation due to its obvious quality both in writing and in the development of its narratives. It unravels a current theme with a revisionist focus in relation to the traditional narratives of the Old West centered on male protagonists, challenging the common places regarding women and men in this type of narrative. For this reason alone, it is already a very interesting choice that can translate into a competent and thought-provoking adaptation. The biggest issue is that there are many narratives with different characters, contexts, and plots. If it is adapted for a film, it would be necessary to select only a few of them (probably the most exciting and prominent). If it is a TV series, an alternative that does look better in this situation, it would probably be a miniseries, with each episode centered on a narrative. In that case, while some of the short stores are perfect for adaptation in one episode, others would have to be extended or profoundly modified to fit that format. Some of them, although they occupy several pages, are formed mainly by internal character thoughts, with the concrete events probably lasting only a few minutes in audiovisual form. Thus, there would need to be important choices and profound changes for an adaptation to be successful with the public - which is, while challenging, fully possible from the very conception of the script. After all, the book has qualities and is pleasant to read, showing a lot of potential in a story that could yield many fruits when adapted.