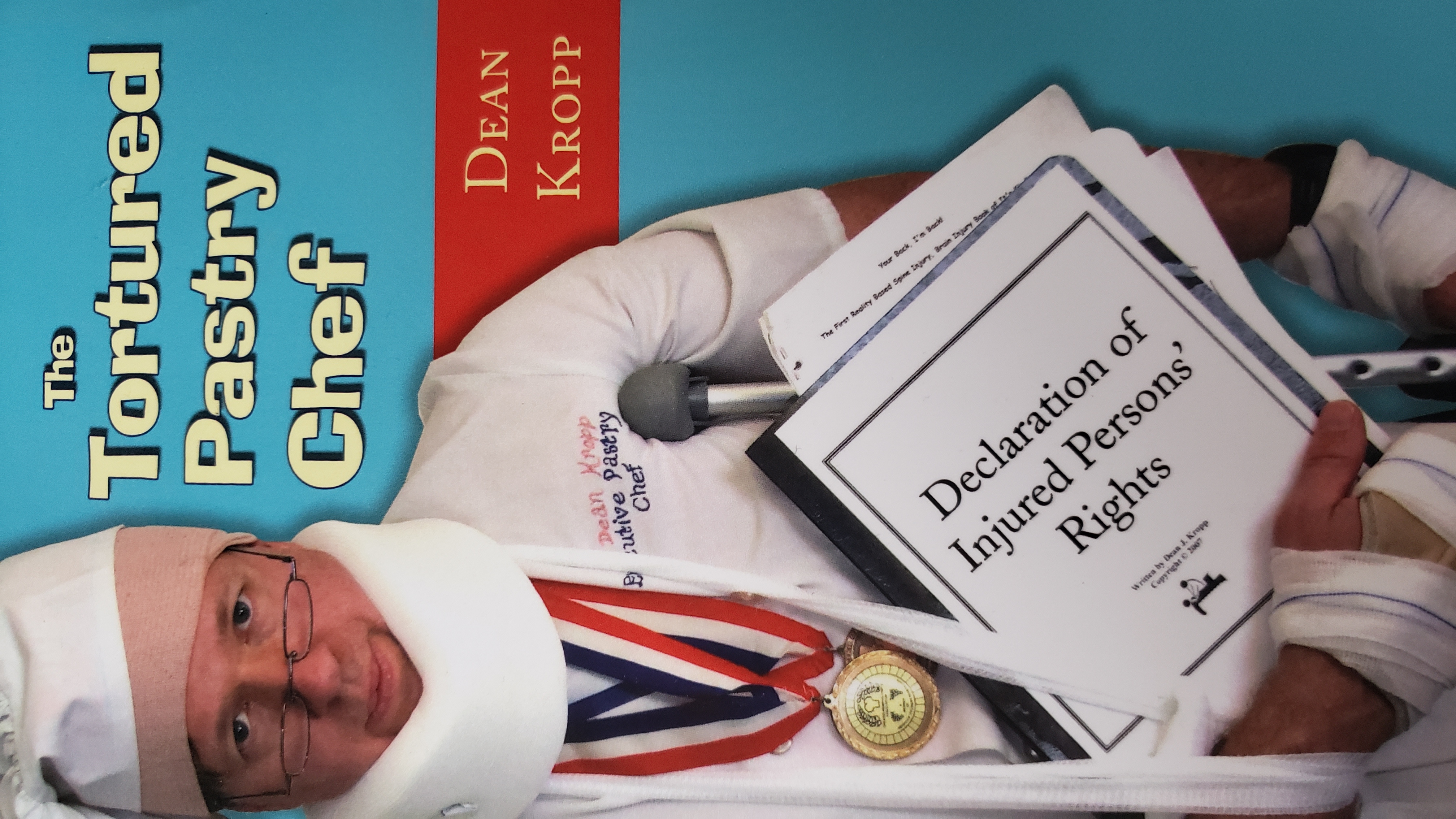 It's about getting injured in car accidents and falling prey to a corrupted no fault system. I had to go to IME doctors who say your injuries are healed. Then what do you do? It's an uphill battle all the way with no end in sight.

We went to the preseason football game on 8/5/2000 between the Bears and Giants. Bears won 20 to 8. The second car accident was in 2004 struck three times in the rear end. It's a sick story of no fault deceit interlaced with getting sued myself and an IRS audit. Nobody will believe it.


I recovered some losses after the first car accident. I recovered very little after the second one because I was threatened by assorted judges if I was to appeal their dismisses. I was forced to get Social Security Disability because the no fault benefits wouldn't pay.

Name: Dean Kropp was a sought after pastry chef and movie producers from LA to Miami, tracked him down to cook for their commercial sets

After a couple of car accidents in 2000 and 2004, I couldn't work in my career as a caterer to the stars due to my injuries that I sustained by no fault of my own. Fortunately I had car insurance. They would take care of me, right? WRONG. Navigating the ins and outs of laws that vary from state to state, fighting insurance companies working diligently to deny claims, and the labyrinth of paperwork and rules for government aid are exhausting...when you are healthy. Try it after an accident or two. Are you prepared if life takes a nosedive after an illness or injury? Do you have a clear understanding of your vehicle insurance? Do you know your 'Rights' if you are hurt in a no-fault accident? Right now, there are none. Would you be able to make a comeback after being out of work for 20 years? Many of us avoid thinking about these questions. Often, when bad things happen, we are not prepared. This is my story. I hope that by sharing it, you can protect yourself. In this book, I did concoct a recipe for you - just in case - so you will feel like you have a fighting chance, in order to heal those injuries. As things stand, there are no 'Rights' to get your injuries healed in New York State while driving your car. And there is no concussion protocol set up for brain injury testing either. I hope that by telling this story, this corruption will be exposed and it will change for the better.

Dean Kropp was born in Joliet, Illinois. Kropp was European trained in the art of pastry after graduating JJC Culinary Arts program in Chicago. Chef Kropp was trained to be the Executive Pastry Chef at the Swiss Pastry House. Kropp was Executive Pastry Chef at Hotel Peabody, the Holiday Inn Crown Plaza in Memphis and the Executive Pastry Chef at Wyndham Rose Hall in Montego Bay, Jamaica. Throughout his career, Kropp was also the catering chef for George Jewel in Chicago, Coca Cola in Memphis and the Wyndham Hotel in Montego Bay. Chef Kropp spent the last four years of his career (1996-2000) catering for Hollywood and sports stars of today. He cooked for Demi Moore, James Earl Jones, Hulk Hogan, Wayne Gretzsky, and his all time favorite, Dave Thomas of Wendy’s. Kropp also competed in culinary competitions winning a couple of golds, a silver and bronze medals. Kropp’s career ended by no fault of his own, with two car accidents. His discoveries will leave a bad taste in your mouth. Kropp is finishing his second book; THE WORLD'S BEST KEPT SECRET - THE CULINARY OLYMPICS - SINCE 1900. Kropp is currently a SAG-AFTRA member and a chef member of the American Culinary Federation. Once you are a chef, you are always a chef.

New York State car insurance policy holders and all other no fault states.

A successful pastry chef, Dean, has a series of unfortunate car accidents and needs extensive physical therapy. The problem is he is trapped in a web of no fault insurance bureaucracy that prevents him from getting the help he needs. Dean has to fight the system while forging his own path to recovery. He unearths faults in the auto insurance industry through his own harrowed experience.

Yes the book profile accurately reflects how the auto insurance industry failed Dean. It might help to mention what his injuries were so that readers understand why he needed benefits as well as physical therapy.

When the first car accident occurs there is a tension of knowing it would turn out worse than it seems. This tension builds until the talk with the general practitioner. The discussion foreshadows the problem that the no fault insurance will expire at some point and acts as a catalyst to discover all of the other fishy practices of the insurance industry.

There can be a repetition in how the auto industry failed in helping insure proper recovery and the courts are in favor of the auto industry not the victim. Once this point is established it is better to have rising and falling actions of new information so that the narrative has momentum. Because the information is understandably explained in the first mention, it does not need a summary later on.It could also be more compelling if the emotions are shown rather than told sometimes. For example the frustration at having to appear at independent consultations per the insurance contract could be shown rather than stated. It could be shown through external reactions such as slamming a door or a heated conversation as frustration would not be known to cinematic audience that can't see inside a character's mind like in a written text.

The hook is that what appears to be a minor whiplash turns out to be far more serious and exposes the failings of the insurance industry as the worse the pain gets the less help is given.

This might appeal to small to medium fan base of an older sophisticated crowd that enjoy corporate dramas about social issues. As this is not a criminal or group issues, but a civic institutional issue, it might have a smaller base unless given a flashy adaptation of bigger stakes such as ''The Big Short.''

This likely would fly under the radar as it is about physical therapy, but no actual changes were made the the auto insurance industry. Many of the characters are static characters so there is not much room for acting range to garner awards attention.

What is unique about the story is that it highlights the major issue of the auto insurance and insurance industry playing “pace the puck” in terms of responsibly treating their subscriber, who is the victim in a no fault accident. By exposing other cases that are similar within the court proceeding this will strengthen the argument of an industry wide societal problem that needs to be fixed.

The lead character is resilient in pursuing the proper treatment with doctors and fighting his legal case in court for treatment he needs after two car accidents covered under his insurance through no-fault claims. He has to overcome a lot of issues while being injured and find their own treatments when the medical and the insurance systems fail him. This presents a strong character who does not give up.

The rising and falling actions of the two car accidents and medical insurance drama afterwards could have more levels. The insurance companies start off bad and then neither get worse or better throughout the work, but as the main antagonist, they should get more problematic as time goes on. Making the insurance the villain who increases being antagonizing over time instead of taking about how the pain is getting worse will make a more follow-able argument about the corruption of the industry.

By raising the stakes, either financially, medically, or emotionally, the levels of the rising and falling actions in failing to take on the auto insurance industry due to no one being on the victims side will have elevating levels to become emotionally invested in and be easier to follow what the events are leading towards in the climax of the court decision and triumphs in the physical therapy. When everything is at the level of downtrodden is it better to have high and low points to follow the trajectory of a three act structure where the lowest point is towards the end of the second act. The institutional problem goes unchanged but could prove more impactful by using the court to showcase how the problem is larger than just the protagonist in an effort to get Hollywood to influence social change. Although it is a social problem, only having an individual example rather than a group does not have the same engagement as how the change would affect others or why the problem is nationally important. The audience would understand the problems presented, but would benefit from solutions in order to takeaway how to change the issues.