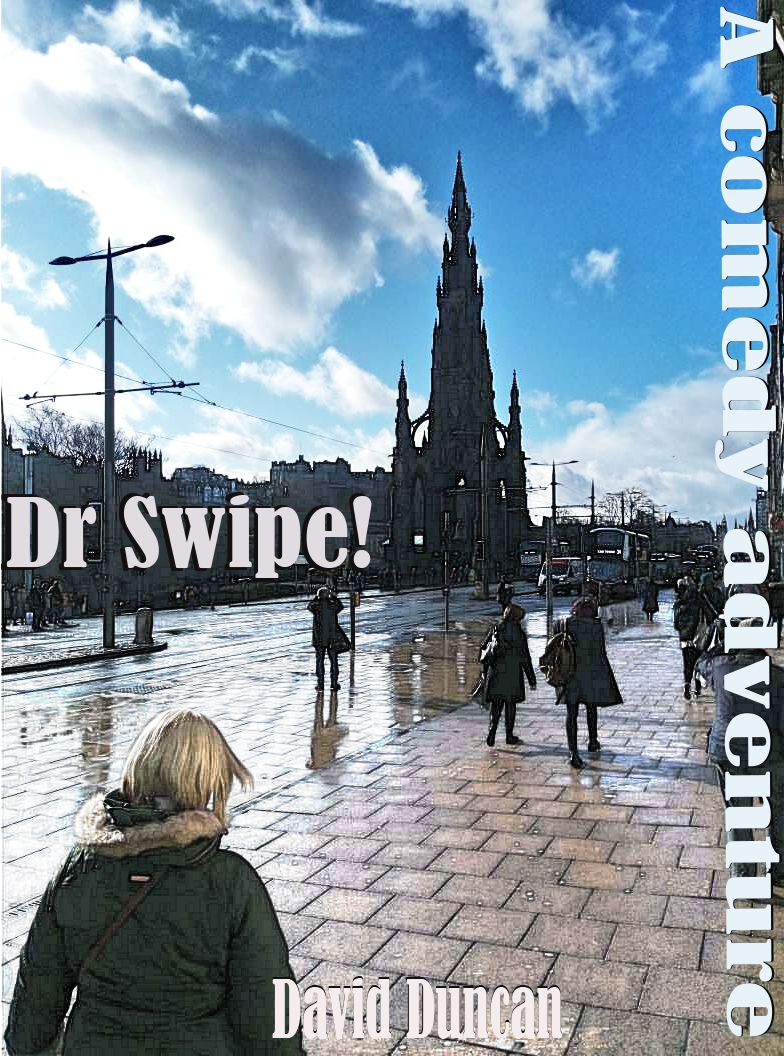 It's about two English doctors, one of whom is robbed of 300 British pounds by six Scottish thieves, and their adventures in getting the money back.

An English doctor, Michael Swipe, working in an A & E department in Edinburgh, Scotland is robbed of 300 British pounds at an ATM by six Scottish thieves. His brother, Dr John Swipe, is determined that the thieves won't get away with it, demands court action and the thieves are arrested.


The Scottish thieves, after adventures in DRC with the doctors, involving the SAS and American special forces, results in the thieves handing over the 300 British pounds thieved about a year earlier and everything is resolved in a satisfactory manner.

BLURB   Dr John Swipe’s idyllic world as a dermatologist in the sleepy town of Exeter in Devon, England, is shattered like glass when he receives news from his brother, Michael, also a doctor, that he has been robbed of the princely sum of three hundred pounds in Edinburgh, Scotland. Their sense of injustice and determination know no bounds! Six Scottish men are subsequently arrested and are summoned to the local Sheriff for the sake of justice. The verdict is not proven but the doctors won’t let it lie. They spend thousands of pounds on a prosecution at the High Court in Edinburgh but this also fails. In their blind anger and quest for justice they embark upon a rollercoaster ride which takes them to Democratic Republic of Congo where they become enmeshed in international espionage that will either save their sanity and their medical careers or completely destroy them. What do the Chinese and American governments really want? What is China hiding? What does Taiwan fear the most? Join Drs John, Michael and Catherine Swipe on an unforgettable journey in quest of justice.

I am married and have 1 child. I graduated with a BA(hons) in English Literature many years ago and taught English in Japan for 20 years. I currently teach English online.

Dr. John Swipe attempts vindicate his brother in the court after he is robbed. Unsuccessful, the two English doctor brothers are forced to seek justice in a very roundabout way. Their adventures take them into international espionage. Eventually they are able to sabotage the virtual lives of the six Scottish men who took the 300 pounds. This is after traveling in Congo and involving China and Taiwan business that puts their practices and lives at risk.

The profile is pretty spot on, but there seems to be a chronology typo in the short summary. The narrative logically seeks revenge after the court ruling, but the summary says the Scotsmen returned the money a "year earlier" rather than "a year later."

The court case hypes up the crime as being about principle rather than recompensation. THis creates a mystery around the doctors about why the principle of being robbed is so important that they would put their reputations and finances on the line to be legally correct. By diving deeper in their internal conflicts, it might help make their pettiness more relatable the more risks they begin to take.

The book has an intricate revenge plot for a simple goal, so it is difficult to follow the character's internal conflict development. While the heroes accomplish their goal it is hard to see how they have transformed. By making the protagonists and the antagonists more three-dimensional, perhaps by opening up the narration to be third person omniscient rather than a more closed first person, this may help the characters be more dynamic rather than static.

This could potentially have a medium to large fanbase due to its international aspect of including China and the DCR which are both exotic locations that are perfect for escapism in an action film.

This is unlikely to gain nominations as the range of emotions within an action film and the message is not zietgeisty enough to gain notice. This has potential within its genre to win popular awards rather than esteem awards.

The length that the two doctors go to gain justice is unparalleled. Understanding their characters outside of just acting on principle will make their motivation more understandable rather than seeming unrealistically dedicated or petty.

Dr. John Swipe and his brother Dr. Michael Swipe are relentless in pursuing their goals and do not bend to any obstacles. They stick to their morals no matter the cost.

The revenge plot is interesting and complicated, but it gives little insight into the characters, both the protagonist and the antagonists. The message is understood and stated clearly that is it about the principle rather than the money, but it is unclear why such a small sum is so meaningful to cause the wealthy doctors to risk even more resources and reputation in going against the court.

Creating dynamic characters over static ones will help increase the emotional investment and logic of the plot driven narrative.