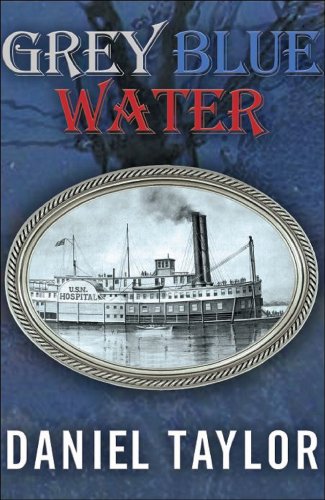 The US Navy's first hospital ship, USS Red Rover, built/repaired at the end of the Civil War and it's builders experience during the aftermath of the burning of the Steamship Sultana. Largest loss of life in military history on the Mississippi River.

John Douglas Taylor feels exiled to Texas by his father, Isaac Taylor. John Taylor was sent to Texas by his father in order to retain land grants from Stephen Austin. John was placed in jeopardy during the next 6 years while in Texas as the country was in transition from independence to statehood


John Taylor spent years in Texas establishing land grant and gaining patents only to lose his fortune after the Civil War. He assisted in the aftermath of the Sultana disaster near Memphis, Tennessee. John freed slaves of his father Isaac.

Grey-Blue Water traces the life of John Douglas Taylor, the son of a wealthy Southern gentleman, from his childhood on a Tennessee plantation, to his adventures in the newly-formed Republic of Texas, and later to his time as a riverboat captain on the Mississippi. The shining thread running through Taylor’s life is the grey-blue water of the Old South, particularly its rivers, from the Cumberland to the Mississippi to the Brazos. The grey-blue water is both an enemy and a friend to Taylor. It takes away a beloved brother and grandfather before he is old enough to understand the concept of death. It serves as an escape route from his rural childhood to a young adulthood filled with danger and adventure. It lures him to an eventful life aboard the picturesque steamboats that transport people and cargo from South to North and back again. The grey-blue water becomes his livelihood, but at times threatens to become his financial undoing. Taylor and his family are eyewitnesses to major developments in the nation’s history, as new states are added and old traditions, including slavery, are done away with. They see the country torn apart by war, but then they witness the scars of war begin the healing process as their grief and bitterness are washed by the grey-blue water.

Daniel Taylor – the Author Born Daniel Mabrey Taylor on February 06, 1959, in New Orleans, Louisiana but grew up in Covington, Louisiana. He attended Covington High School. He would work as a yard maintenance man, lifeguard and competitive swimmer, farmer, soft drink delivery service owner, paper delivery boy and pizza chef before attaining his Eagle Scout ranking in the Boy Scouts. Dan worked as a roughneck and roustabout in the Gulf of Mexico oil fields before college to help his parents financially with his college expenses. He attended LSU before transferring to Ole Miss to graduate; degreed in both Naval Science and Business management. He excelled at creative writing throughout his years in school and was inspired by the works of Samuel Clemens, Walker Percy, Tennessee Williams and Harper Lee. daniel.taylor.180.180He was a deck officer aboard several US Navy Ships as an officer out of the Pacific Command in Hawaii before moving to Nashville, Tennessee and marrying his wife Paula Dibrell. He served wartime duty in the Middle East countries of Bahrain, United Arab Emirates, Kuwait, Oman and Saudi Arabia and also gathered a unique sense of the world’s diverse cultures in over other twenty countries. He ran military exercises in South Korea, oversaw civil-military medical and dental operations in the Philippines and strategic military cooperation talks in the Philippines, Malaysia and Brunei. He directed the building of a runway in the Nueva Ecija Province, Central Luzon, Philippines to support the local economy as well as the support of the mutual defense of the country. He worked out of US Embassies in Oman, Bahrain and the Rep of the Philippines during the gulf war and then in Kiev, Ukraine and a US Consulate in Kyushu, Japan. Highly decorated, Commander Taylor has worked at Fort Benning, Georgia during Bosnian operations. In-between military assignments around the world, he received a degree in the culinary arts in Portland Oregon, worked as a Restaurant manager in Portland, Oregon and ran unsuccessfully for city council in Beaverton, Oregon. He ran culinary operations at Intel Corporation in Aloha, Oregon for a contractor. He was published in 1989 for a naval publication and decided to begin pursuing a writing career with more vigor. In 2006, after working towards his Master's Degree, Dan arrived in the Metro DC area to work as an IT Asset Manager and as a freelance writer of pre-civil war history and naval operations on the Mississippi watershed. dan.paula.taylorHis expertise in genealogical research coupled with his wife’s family history and handwritten correspondence preserved by the family since 1843, Dan decided to combine his talents and complete a series of semi-biographical novels he named Grey-Blue Water. Dan’s extensive domestic and international travel and particularly his work with the poor in Southeast Asia have enabled him to amass a fortune in literary thoughts on and experiences of the human spirit. His life has focused upon adventure and a desire to lead and to comfort those in need. The human desire to endure and expect the unexpected is his literary style and lifelong passion. Dan and Paula now live in Manassas, Virginia.

Sparta, Tennessee and Houston, Texas, US Navy, Department of Defense