Nick Hawthorne and the Banefires of Autumn 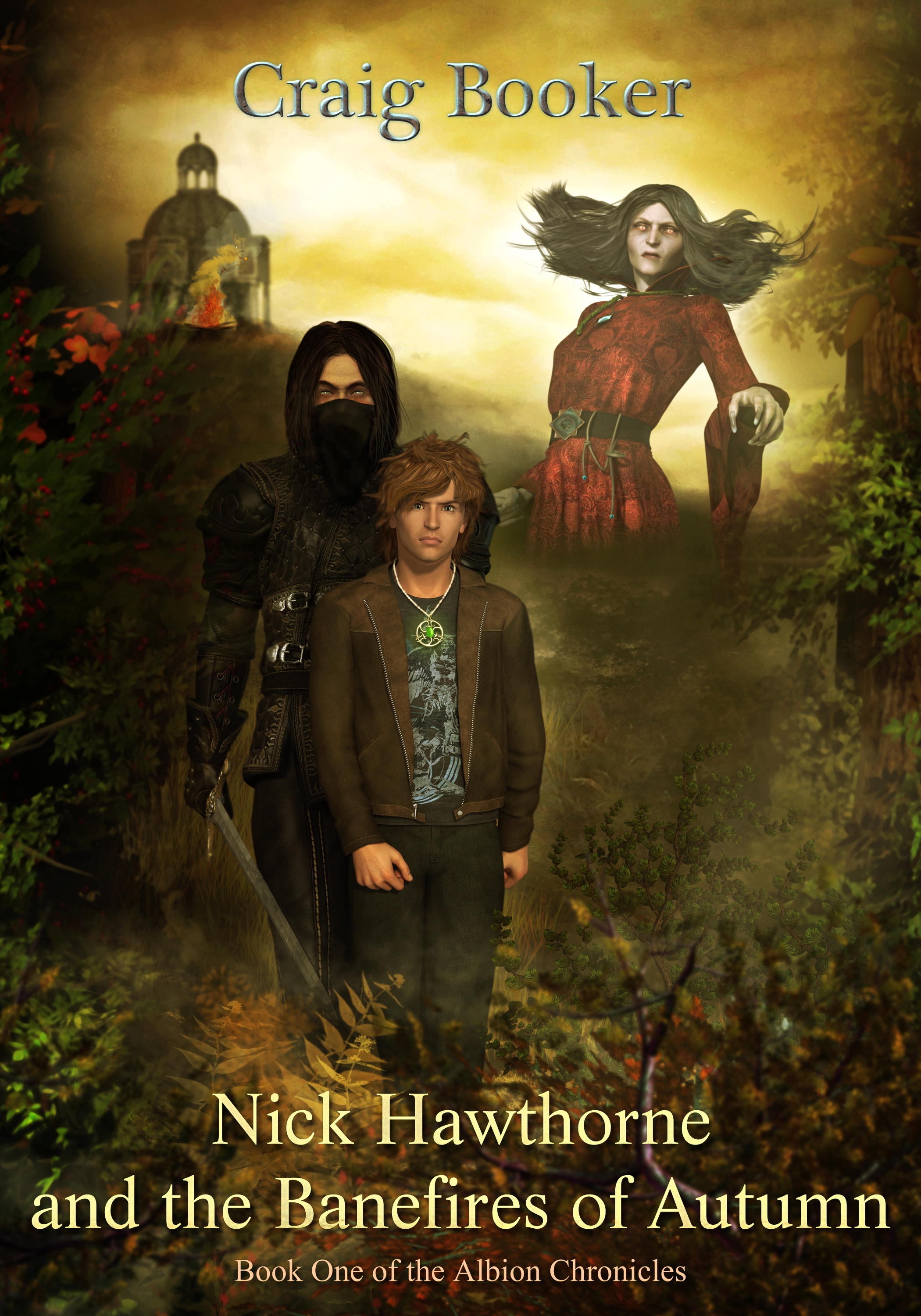 It’s almost the time of the Conjunction in Albion, and the witch Nightshade is seeking to unleash Armageddon. Derbyshire youth Nick Hawthorne is plunged into this maelstrom of alien malevolence when he accidentally finds the only talisman capable of stopping her.

Present Day England: Nick Hawthorne, who lives with his uncle on the Derbyshire moors, dreams one night that he's found a golden talisman in a wood nearby. He is immediately attacked by a hideous creature, but (with otherworldly help) escapes. When he wakes up, he finds the artefact is real!


Nick succeeds in his quest to prevent Nightshade from unleashing Armageddon in Albion, but when he recovers consciousness finds himself on the hill above his home. But a series of events has now been set in motion which will have deadly consequences in both England and Albion.

Name: The Eyes of the Wind (The Rider)

This is an original piece of fantasy worldbuilding, with English folklore at its heart. As a trilogy, it would be suitable for both film and tv adaptation. It's fast-moving, so I'd like to see it adapted as such - more Lord of the Rings films (slow sections trimmed or removed altogether) than the Hobbit movies (too bogged down in detail). Follow Nick's journey as he battles not only creatures from folklore but also his own inner demons as he struggles to cope with the reality that there really are two versions of England: the one he knows, and the one where Magick is rife. His actions (and the small motley company he gathers around him on his quest to defeat Nightshade in book 1) will have consequences for both worlds. Along the way, there are perilous adventures, nail-biting encounters, and of course love - in itself unexplored territory for Nick. Plot twists also abound, ensuring that readers/viewers interests remain piqued. This is an original piece which would adapt extremely well to screen - please help me make it happen!

Craig Booker – Biography Craig grew up in Ecclesfield, a village which borders Sheffield in the north of England. His first novel – a handwritten full-length science fantasy work whose title he’s long since forgotten – was submitted to a national newspaper competition when he was only 14 years old. Sadly, it failed to win, but that didn’t deter him – it’s hard to quash a major passion! Since those formative times he’s tried his hand at horror (unpublished) and locked-room murder mysteries (two volumes published). His most recent work is YA fantasy – the ‘Albion Chronicles’ trilogy, which echoes worlds created by Phillip Pullman, Alan Garner, Susan Cooper and Rick Riordan – worlds connected to ours by mythology and folklore. The first 2 books of the trilogy, ‘Nick Hawthorne and the Banefires of Autumn’ and ‘Nick Hawthorne and the Crossbones of Winter’, are complete. Book 3 is 2/3 written and will be completed this year. Expect crossover worlds, magick, flawed heroes, villains more forces of nature than tyrannical despots, some of the nastier creatures from folklore – and a fifteen year old protagonist totally out of his depth! Craig currently lives in Handsworth, Sheffield, and is happily married to Andrea. Website: www.craigbookerauthor.co.uk

A young boy is transported to a land of magic and fantasy to help defeat an evil witch and save the land.

At first, he narrative that mixes many elements of fantasy.

At times, this feels like a derivative fantasy novel. There is nothing fresh or unique about it. It would need something to make it stand out from others like it. Diving more into the character’s backstories and exploring what makes them different and why would remedy this issue.

The problem is that the story sounds unoriginal. It needs a different twist or new elements from stand out within the genre.

If the book becomes a bestseller before the movies get made, it can carry its fanbase.

LORD OF THE RINGS, GAME OF THRONES, HARRY POTTER

Like I said, the whole thing is a derivative mixture of existing fantasy tropes. It would have to be started over using different elements.

They are all fairly cliche at the time. I don't know how they could be fixed with the current story. New elements could improve their narrative arcs and interior growth.

As it is right now, this is neither rare nor a gem. This is an average story that can be improved by the use of elements that freshen up the genre.

Creating character arcs and themes developing throughout the story rather than just following the magical “savior” archetype. The basic ideas for the story are cool and creative, which is good, but the narrative and the writing need more development in order for it to have any appeal for the public. Therefore, it needs a full, careful revision, maintaining the elements that work for the story and rethinking the ones that feel too simplistic.