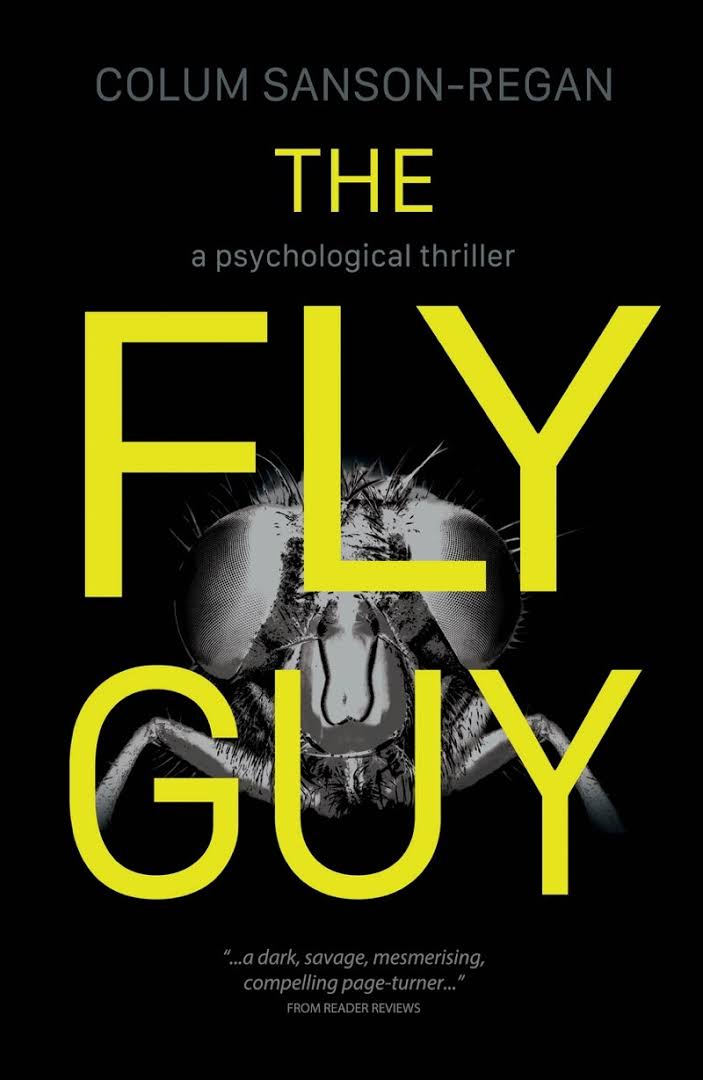 A psychological thriller with elements of horror. Martin is a struggling author who appears to find success and a happy relationship when he creates a detective, Henry Bloomburg. As Martin becomes more obsessed with a female character, Lucy, Henry turns up in Martin's reality to investigate him.

Martin is a loner who can't believe his luck when Alison shows interest in him. He is a struggling author, writing a detective, Henry Bloomburg. An ezine publishes his grisly stories of drugs, murder and sex and an elusive horrific Fly Guy.Alison and he fall in love.He decides to write a novel.


Alison has met and fallen for Gregor, the antagonist of Martin's novel. Henry confronts Martin re the missing girls and his female character Lucy. Martin kills Henry by battering him, buries his body and digs up the novel and starts to write himself into the story.His walls of reality have crumbled

The Fly Guy is a twisting tale about a novelist whose realities are not as stable as he thought and is for adult audiences who enjoy unpredictable, challenging psychological thrillers with elements of horror. It is adult themed, with scenes of sex, drug use, torture and violence. As Martin retreats deeper into his novel and is supported by Alison, his feelings of inadequacy grow and he looks up old friends and visits a sex club. The more the surface of this seemingly idealistic and artistic character is scratched, the less straightforward his character becomes, and the deeper his obsession with Lucy, one his characters, becomes. Martin's fiction involves; a powerful criminal, Gregor, bringing a new drug on to the streets; an addict Lucy, who Gregor has rescued from abuse; a detective, Henry, hired to investigate an affair; the mysterious disappearance of young women; and an horrific otherworldly presence, The Fly Guy. When Martin gets a chance to start a promising job and reorient his life he stops writing and takes it, but everything he is rebuilding is threatened by the arrival of his detective Henry Bloomburg. Meanwhile Gregor's plans are threatened, Lucy's true nature is revealed, Alison explores life beyond Martin, and Bloomburg is haunted by The Fly Guy. Perfect for an addictive short series: engaging characters, multiple character arcs, intertwining storylines, plenty of plot twists. The ending is intentionally ambiguous; there is potential for expansion or Part 2

Colum is an Irish musician, lecturer and author of novels and short stories. He lives in the UK and teaches at University of South Wales. The Fly Guy is is debut novel and he has since published a collection of short stories, The Tall Owl and Other Stories. 'I grew up in Blarney, Ireland, where I started making up stories to coax change from tourists' pockets. In my teens I got into acting, did some theatre work and then abandoned school and moved to the Canary Islands to play music, and since then I've been a professional musician. As a musician I recorded and played all over the UK and USA, until I settled in Wales and finally got round to studying in my 30's. I studied Creative and Professional Writing, achieving a Mphil and winning the Michael Parnell Award for Fiction (a university award). Since then I've been playing music, teaching, writing and bringing up two girls with my wife here in South Wales, UK.'

Martin is an ordinary man working on his day job and his new relationship with Alison. In his free time, Martin is also a writer working on a novel about drugs, sex, violence and horror. But his life changes when he sees, in person, a man right out of his books: Henry Bloomberg, the detective. From this moment on, the characters in his fiction come alive and get involved in his life, to the point the walls separating fiction and reality disappear and we don't know anymore what is reality and what is literature - not even the writer himself.

Book profile reflects book accurately, however Short Summary could be edited and reviewed as it doesn't do the book justice.

The first thing we notice about the story is how fast the main character is shaken up from his stability and how the inciting incident is well constructed by the author - these factors entice curiosity about the narrative.

Nothing made me want to put the book down, even though some sex scenes are not for the faint of heart and most probably wouldn't be suitable for audiovisual.

I would watch this movie because it brings along an outstanding narrative construction and the theme is original. It challenges the logics of the audience. Pulp Fiction meets Jekyll & Hyde.

It could have a large fanbase if adapted especially because characters are emblematic and the end of the story is open to further interpretations, which can be stimulating to the audience.

It could certainly have awards potential because the story is challenging in all fronts, as it mixes up a (supposedly) fiction world with a (supposed) reality, but these lines are blurred as narrative unfolds.

The originality of this story is that it begins with an ordinary setting and a standard protagonist. However, this starting point is the key to defying audience's own perception of reality as surreal scenes and characters created by the protagonist invade the supposedly real life that took place in Martin's life.

Martin is a dubious character and readers are led to get each time more curious about who he really is. Even though the mystery is not completely solved, one thing can be said: Martin is the catalyst of all events happening in the story, which are not light ones. Henry, the detective, is a mysterious character who seems to hold the key to understanding the logics behind the story - and even though this is not completely or clearly revealed, he certainly grows in the heart of the audience, opposite to Martin.

It is a rare gem.