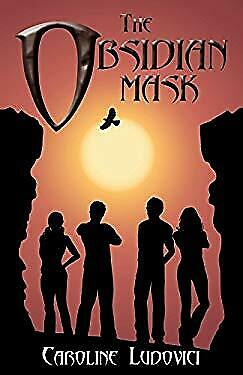 While their archaeologist parents excavate the desert tomb of an ancient Mesopotamian warrior queen, Natasha discovers her mother's suspected relationship with the director of the dig is the least of her problems. She and her brother Alex, are thrown together with the director's two children, and the four young teens find themselves tied together in more ways than one.

4 teens, 2 English siblings, 2 Italian, are kidnapped for priceless ancient mask while archaeologist parents excavate at desert dig. Jealousy and distain of 14 yr old protagonist towards other 2 teens, eventually overrun by respect and friendship under harrowing circumstances.


The children escape their kidnappers, thanks to youngest teen climbing down cliff, the mask is recovered, the children become friends and the relationship of their parents is accepted ( kind of ) by Natasha. Leading to sequel, based on Italian dig.

The Obsidian Mask is a fast moving, exciting international family adventure, where four teenagers, two siblings from London, Natasha and Alex, and two from Italy, Lorenzo and Gabriella, meet on a desert archaeological dig, where their archaeologist parents and the team excavate the tomb of an ancient Mesopotamian warrior queen, previously thought only to be a legend.. Exciting, insightful, tender and very down to earth. Natasha's first crush on a Polish volunteer, and her jealousy over the suspected relationship between her mother, Julia, and the director of the dig, Marcello, the Italian children's father, and her distain for his two teens who she has reluctantly been thrown together with, become insignificant, when the four are kidnapped under very harrowing circumstances and held for ransom, for the ancient priceless Obsidian Mask that the team has just unearthed in the queen's tomb. This is a real, no frills, fascinating working dig, no special effects, no silly archaeological enhansements, a meaty story where we get to know the characters as the story unravels and the adventure begins. A beautiful, rocky, sandy backdrop in the Mesopotamia desert, strong, interesting young characters to portray and develop, a twist at the end and a sequel already written based in Italy, as the family saga and adventures continue, when the parents, now engaged, excavate a cache of sunken Etruscan ships under the railway station in Pisa. (Secrets of the River.) Book 3 under way.

With a passion for history and archaeology and remote destinations more off the beaten track than on, Caroline is never happier than when in the saddle of a camel in the heat of the desert, or on a dusty, overgrown, path leading to an ancient ruin. Caroline’s worldly experiences are the core of her stories, making the exciting exploits of her teen characters, Natasha, Lorenzo, Alex and Gabriella, so real and believable that the reader imagines they are actually there with them. She leads the reader into the world of archaeology with ease and clarity, using it as the backdrop of every adventure, not too much, but just enough, leaving the reader interested and wanting to dig deeper. Caroline lives in Philadelphia but born and raised and in London. With an adult child in the UK and the other in the US, she has a foot planted in each country. She works in interior design, plays tennis when not researching for her stories, and writes. Book two, Secrets of The River, the sequel to The Obsidian Mask, is based on an Italian dig outside Pisa, (published and available) and book three is under way, based in Algeria.