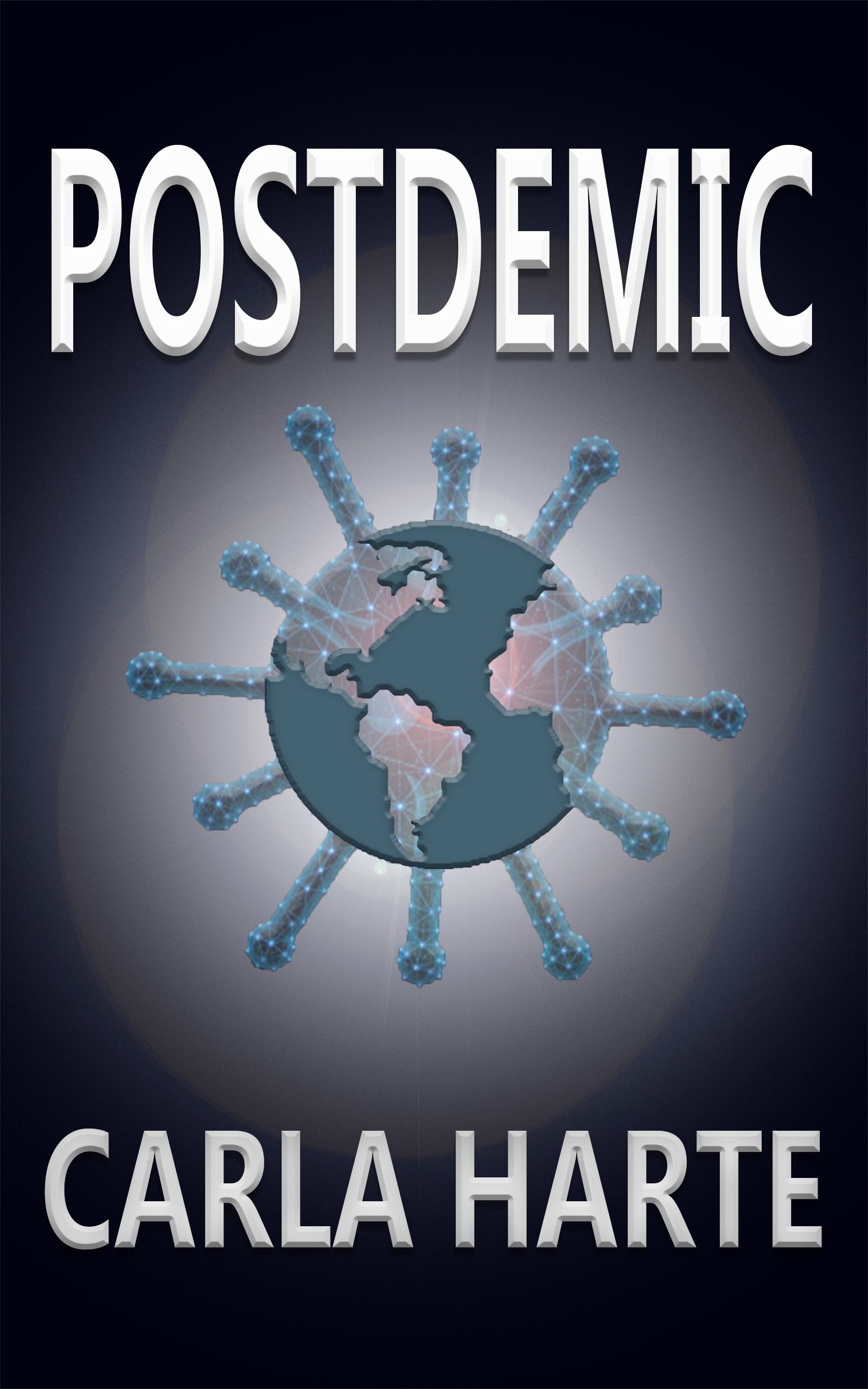 In a future where the scant survivors of a deadly pandemic live a false utopia, controlled by an omniscient government and served by an army of humanoids, a despondent woman stumbles upon a cocky young girl, who holds a secret that could set humanity free, provided they can uncover the true past.

Bethryn Stack, reeling from her own loss, begins obsessing over a neighbours pregnancy. When the babies are still born, but the neighbours carry on like nothing is wrong, Bethryn sets out to find answers which lead her to Agnet, a teenage girl with a secret that could threaten their existence.


Bethryn and Agnet uncover what really happened during the Pandemic, but to shut the connection down, they need to find Walters laptop which is in Agnet's house. They retrieve it, but are attacked by tickers and only escape when Jak sacrafices himself, leaving them free to deactivate the program.

Fictional land of Salvetica (which at one point was the UK)

Misinformation, fake news, conspiracy, pandemic. All words on everyone’s lips right now. But eighteen months ago when I began writing, they were ideas being mocked or dismissed. The story of Postdemic was devised as a window into what science denial, media distrust, unchallenged misinformation, division and inequality would do to a society that found itself facing an indiscriminatory existential threat. How it would shape our actions and our future, what lessons would be learnt from it and at what cost. Then that threat showed up in real time. Postdemic is still just a story, it has action, adventure, car chases, abandoned palaces and a bit of romance, but the underlying message is more prevalent now than ever as we evaluate our new normal. People will see themselves in the characters and find an attachment to their journey because of current events. They will compare the past in the story, as the characters unravel it, against our present, and hopefully understand the hidden lesson that pushing back against the truth, will only lead to more lies and that ultimately, at some point, we will have to be saved from ourselves. As one of my beta-readers put it “It’s like the Handmaids tale meets Minority report” and as the story takes several turns throughout, it would work well as a mini-series on it’s own or as a feature length movie with a spin off as more chapters are added and the rest of the dead world are explored. There are, after-all, bound to be other survivors.

Carla Harte is a writer, mother-of-three and a Bachelor of Law based in the UK. She self-published her first book, an Irish fairy tale titled "Shee" which was based on short stories written over many years, in April 2019 followed by crime thriller "Uncatchable" later that summer. Carla writes an eclectic mix of Murder, suspense and fantasy and has also written, illustrated and published several environmentally conscious picture books for ages 2-7, to help highlight the danger of plastic waste to young children.

Living in a utopian, post-pandemic world controlled by the government, Bethryn Stack finds out what really happened to the humans in the past, and will have the chance to save humanity from a corrupt authority.

It does depict the book properly.

The diverse components the author used to build this futuristic world. She uses elements that are not very distant from the possibilities we have today, and it gives them a touch of reality.

The story is not very original, which makes it sound repetitive. Having a government that controls and hides the truth from the citizens seems to be a too familiar plot to draw our attention. It needs more complexity.

The hook is the way the author adds futuristic (and somewhat original) elements to the story. Also, the idea that having a "perfect" environment is not a guarantee for an enjoyable life is compelling.

I don't think so. The story needs something extra to attract a large audience. It's well-written in terms of structure, it is engaging, and it talks about the future of humanity in a post-pandemic world, but it needs more elements to establish a fanbase.

No. It needs more complexity, depth, and originality to have Awards potential.

OMNISCIENT - A FUTURE IN WHICH EACH CITIZEN OF A SPECIFIC CITY IS MONITORED 24/7 BY THE SYSTEM. 1984 - A REPRESSIVE REGIME THAT MONITORS CITIZENS. MINORITY REPORT - A FUTURE SOCIETY THAT ABOLISHES CRIME AND VIOLENCE FROM ITS DOMAIN.

The elements of the story are more original than the story itself. The universe the author creates seems unique, but I believe she could improve the dramatic conflicts to make the story more appealing.

Despite living in a futuristic utopian world, the characters are similar to us, they have similar wishes and fears, which make their journey more attractive.

It's not. It has good elements, an interesting universe, engaging actions that are able to sustain the suspense, but it needs more authenticity to be a rare gem.

The story already has interesting futuristic elements that make the universe appealing. It has credible characters, and the suspense is handled very well during the action scenes. The structure is dramatically good, the pace is suspenseful and engaging, and information is slowly unveiled, so we can follow the story while trying to guess what happened. It also has this post-pandemic world that could make the audience connect more deeply with the characters and their problems. It means the story has a lot of good elements, but to be adapted it needs more complexity. Why would someone want to tell the story of a city controlled by an omniscient government, if this kind of plot was already largely explored? Probably because the protagonist stands out, and the story of this character is dramatically engaging. It's the individual, the protagonist, his particular drama that matters to the adaptation. The universe is just a background that would increase conflicts and stakes. In this case, I believe the lead characters' struggle should be further developed, the characters could face even more internal and external conflicts. This dilemma of living in a perfect world or being free is beautiful and intense, but it could be better explored.