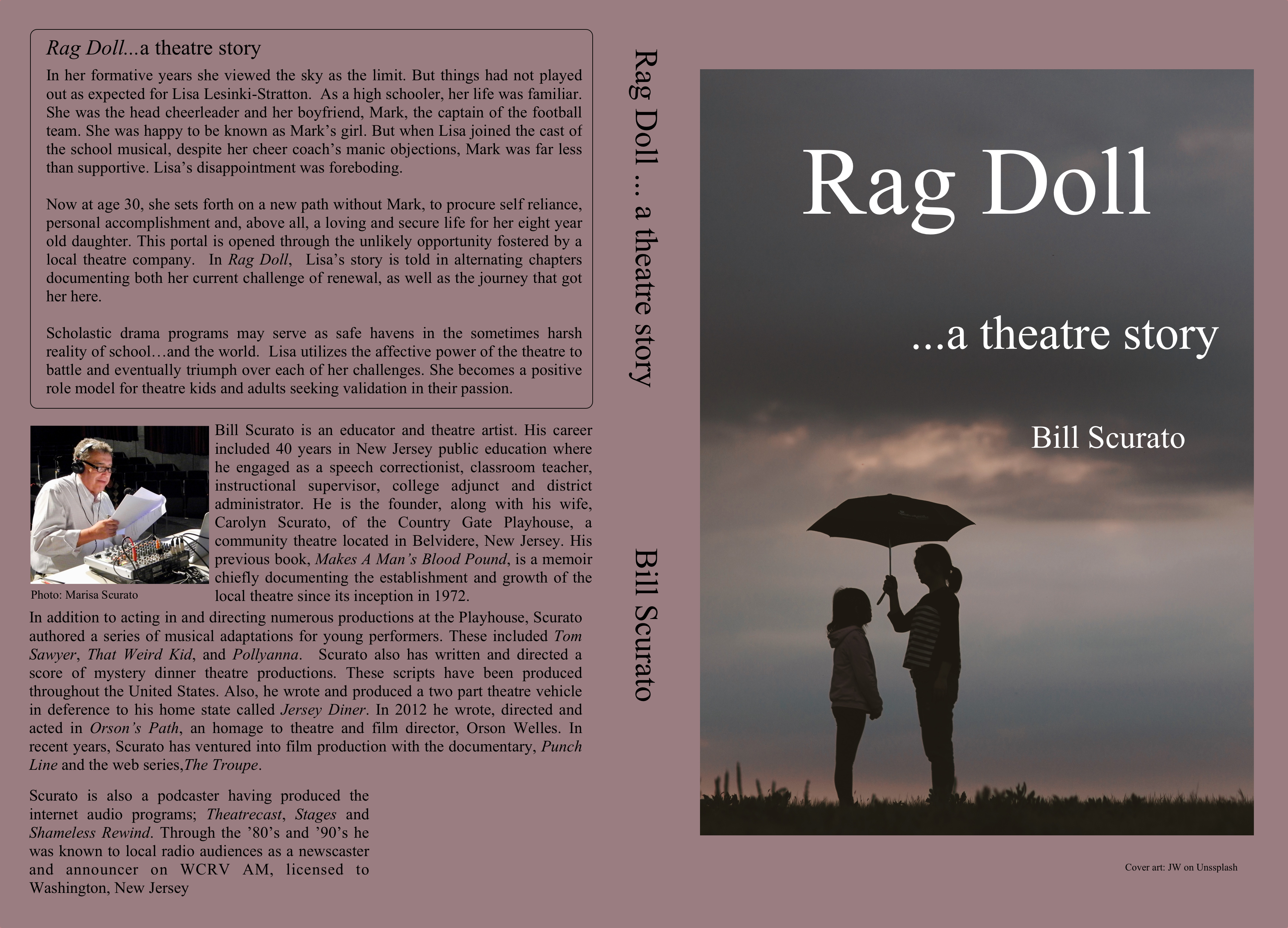 The book explores a young woman’s quest to overcome disappointing beginnings to procure self-reliance and security for her eight year old daughter. This portal is opened through the unlikely opportunity fostered by a local theatre company.

The book begins as Lisa prepares to audition for a local theatre production. By stepping into this new environment she hopes to begin a new chapter in her life. It represents a positive renewal for herself and her daughter, as she leaves much unpleasant baggage behind.


In the end Lisa’s renewal is promising, if not complete. Her local theatre debut has been positive and validating, but her personal life is still a work in progress. She determines to put her relationships on hold in order to pursue her daughter’s continued well-being.

"Rag Doll...a theatre story" In her formative years, she viewed the sky as the limit, but things had not played out as expected for Lisa. As a high schooler, her life was familiar. She was the head cheerleader and her boyfriend, Mark, was the captain of the football team. She was happy to be known as Mark’s girl. But when Lisa joined the cast of the school musical, despite her cheer coach’s manic objections, Mark was far less than supportive. Lisa’s disappointment was foreboding. Now, at age 30, she sets forth on a new path without Mark, to procure self-reliance, personal accomplishment and, above all, a loving and secure life for her eight year old daughter. This portal is opened throughout the unlikely opportunity fostered by a local theatre company. This a contemporary story of a young woman’s journey in moving toward a revised vision of her future. Her new life mission is paralleled by a passionate immersion in a community theatre. The story is relatable to anyone who has struggled to rebound from a setback and put the welfare of others before himself or herself. Although the main focus of the book is the dramatic struggle of the protagonist, there is certainly plenty of humor to go around. It may be reminiscent of the PBS adaptation of Kurt Vonnegut's short story, “Who Am I This Time.” This material would certainly work as a feature film, but because Lisa’s journey spans a ten year time frame, I believe this book would work best as a television mini-series.

Bill Scurato is an educator and theatre artist. His career included 40 years in New Jersey public education where he engaged as a speech correctionist, classroom teacher, instructional supervisor, college adjunct and district administrator. He is the founder, along with his wife, Carolyn Scurato, of the Country Gate Playhouse, a community theatre located in Belvidere, New Jersey. His previous book, "Makes A Man’s Blood Pound," is a memoir chiefly documenting the establishment and growth of the local theatre since its inception in 1978. In addition to acting in and directing numerous productions at the Playhouse, Scurato authored a series of musical adaptations for young performers. These included "Tom Sawyer," "That Weird Kid," and "Pollyanna." Scurato also has written and directed a score of mystery dinner theatre productions. These scripts have been produced throughout the United States. Also, he wrote and produced a two part theatre vehicle in deference to his home state called "Jersey Diner." In 2012 he wrote, directed and acted in "Orson’s Path," an homage to theatre and film director, Orson Welles. In recent years, Scurato has ventured into film production with the documentary, "Punch Line" and the web series,"The Troupe." Scurato is also a podcaster having produced the internet audio programs; "Theatrecast," "Stages" and "Shameless Rewind." Through the ’80’s and ’90’s he was known to local radio audiences as a newscaster and announcer on WCRV AM, licensed to Washington, New Jersey