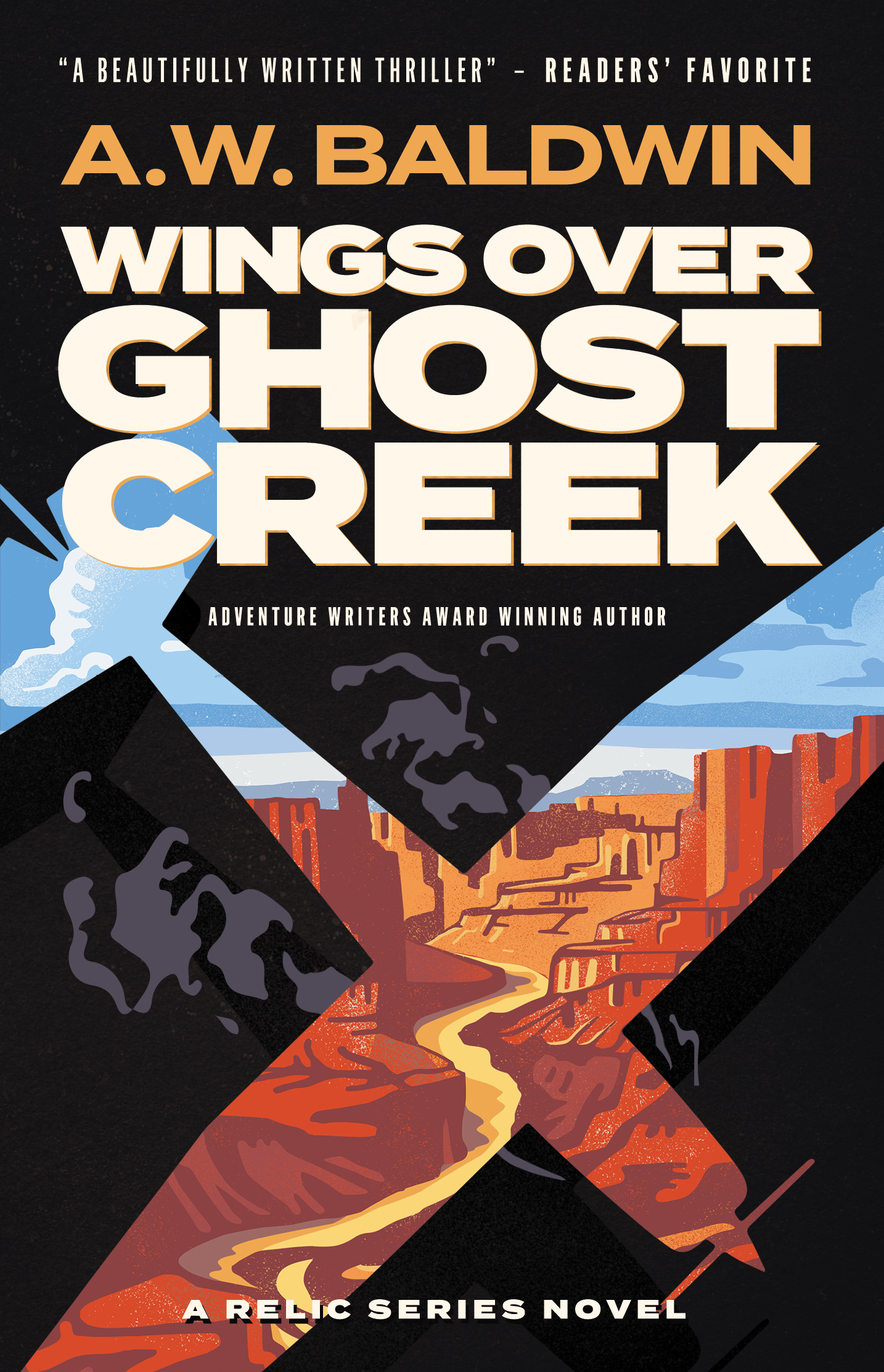 A moonshining hermit and a young park ranger each discover an archaeology field class where people have been killed and the site is suspicious. When the ranger is shot from the sky, he and the hermit flee the sniper and return to save the students. With help from a co-ed, they escape.

The hermit "Relic" says to himself “I don’t know whether to scratch my head…or my butt.” He discovers a man with a rifle watching over a college field class in archaeology, fiddling with a spooky scarecrow that is way out of place in the desert canyon. What is going on here?


The young park ranger/reluctant pilot and a college co-ed fly a partially-restored 1946 airplane to safety, saving themselves and the students from the sniper and artifact thieves. The hermit “Relic” heads back into the canyons to return a treasured artifact to his Hopi relatives.

A moonshining hermit, a young park ranger/reluctant pilot, an archaeology field class, and an unusual $5 million plunder set the stage for this action - adventure (with a touch of humor) in Canyonlands National Park (Utah’s red rock country). A pair of naive teenagers rob a museum and when they try to sell artifacts to a three-man team at an archaeological dig, one of the men kill the teens for their treasure. A young park ranger flies with a seasoned pilot to inspect the site but when the ranger finds the arm of a dead teen exposed in a make-shift grave, he leaves quickly to get help. One of the men suspects the discovery and shoots the pilot and the plane from the sky - the ranger must crash-land in the Colorado River. The hermit saves the ranger and the mismatched pair must tolerate each other (humorous interactions), flee the sniper, circle back to the site, and save the students. When they return, they partner with a college co-ed who helps them. In a twist, the professor at the site turns out to be part of the criminal scheme. The students escape in a vehicle, but the ranger and co-ed must find another way as the three-man team closes in on them. The ranger must abandon the nay-sayers in his life to realize his full potential. In a desperate move, they fly a partially-restored 1946 airplane to safety and the artifact thieves are caught. The hermit will return the valuable artifacts to his Hopi relatives. Readers' Favorite says it has "funny, zippy dialogue."

Readers’ Favorite has awarded 5 stars to all of his novels, calling Wings Over Ghost Creek “a beautifully written thriller.” An avid backcountry hiker, canoer, and whitewater enthusiast, the author takes his readers on adventures in ancient lands that shape the motives and spirits of his characters. A.W. Baldwin finished his first novel, Desert Guardian, in 2017. His second novel, Raptor Canyon, builds on a character introduced in Desert Guardian, a moonshining hermit living deep in the remote canyons of Utah. Raptor Canyon received the Grand Master Adventure Writers’ Finalist Award and was a finalist in the 2019-2020 Screencraft Cinematic Book Contest. His third novel, Wings Over Ghost Creek, was released in 2019 and also has received the Grand Master Adventure Writers’ Finalist Award. His fourth, Diamonds of Devil’s Tail, was released in October of 2020. Sandstone monuments, sheer canyons, and startling vistas provide the unique settings for these thrillers. Adventure, mystery, and personal challenge combine in a world surreal in its scope and deeply rooted in American history. A graduate of Wright State University and the University of Idaho School of Law, Baldwin has practiced law for more than 35 years. He began his career with a poverty law fellowship award on the Wind River Indian Reservation in Wyoming. He has appeared before the U.S. Supreme Court, Ninth and Tenth Circuit Courts of Appeal, and other Federal, Tribal, and State Courts. He won the right of the Northern Arapaho Tribe to operate (and self-regulate) the full gamut of casino-style gaming without state control. He has successfully litigated First Amendment religious liberties, voting rights, Tribal sovereignty, and for environmental justice. He earned his private pilot’s license in 1997 and enjoys flying a Cessna 172.

A mountain moonshiner named Relic and a Park Ranger escape imminent danger as a class of archaeology students are pinned down by an unknown sniper in the Utah Canyonlands National Park. Relic and the ranger revive an old prop plane from the 1940's and head back to Canyonlands to save the students and stop the mysterious sniper.

Yes, the book profile does depict the book.

It gets into the action quickly.

No - it was entertaining.

Can a mountain moonshiner and a park ranger save a group of archaeology students from a group of half-wit thieves?

This may have a fanbase of "mystery" fans.

Not that kind of film.

RAIDERS OF THE LOST ARK, HIGH SIERRA, IT'S A MAD, MAD WORLD

It's unique in its setting. The script should have more dialogue.

Not rare but a decent caper. It has the plot points of an entertaining film.

While this doesn't knock me out, it's entertaining. With the right cast and creative team then as a TV this series could have legs.