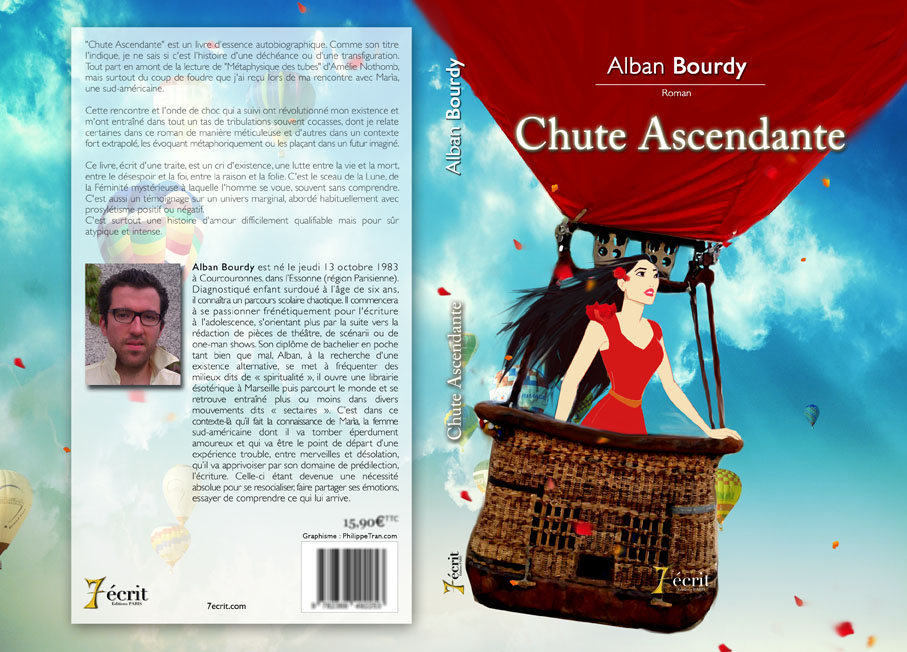 It's about a young French idealist man (about 25) who meets a South-American woman 15 years older and fell madly in love with. The woman was one of the leaders of an international criminal sect (Ashram Shambala) and she leads the young man to become a responsible in the movement.

All the book is based on an antithesis between what the young French man thinks to live, and what happens really. In the beginning, he's a young man, bookseller who just lost his library, and he became fascinated by a South-American woman pretending to be a shaman and asking him a lot of things.


There are two parallels stories, the other one is the story of the young man later, became famous because of the success of the book he wrote about this story. Now in a new idyllic relationship with an actress, but always in love with the South-American. This crazy love brings him to crazy situation

A French man, 26 years old, just lost his bookstore when he's contacted through Facebook by a Yoga teacher he doesn't know. This yoga teacher, who is in Marseilles like him, puts him in contact with a South-American woman pretending to be a Siberian shaman. This South-American woman, 43 years old, is going to Marseille for the first time and wants people to come to the conference and seminar she planed to give. The young man's gonna fall deeply in love with her at the first sight. He never knew love like this before, and his candor faced to this love will bring him to follow this woman in crazy situations. This woman is one of the leaders of the criminal sect Ashram Shambala (an international movement, born in Russia, whose founders are jailed). After have became also a responsible in the movement, the French man is blind to what really happens and thinks he lives in a fairytale. Soon, this fairytale will become a nightmare as his beloved one, who pretending to share his feelings, gets into a relationship with his best friend. He wrote the story in a book who makes him famous. He meets a talented actress who loves him deeply, he get in a relationship with her, but he's still in love with the South-American and crazy things still happen related to the sect. The artists' couple is successful,the actress dies at the same time as their babies, on the day of the childbirth. The writer becomes crazy and is brought out of the society by the sect who makes everyone believe he's dead.

Alban Bourdy is a French writer born in 1983 near Paris. Diagnosed gifted when he was 5, he became a bookseller in Marseilles and had theatrical experiences in Avignon (as actor, author and director). For the love of a South-American woman who was one of the leaders of the movement, he joined an international sect from Russia (Ashram Shambala). He became progressively, as he was 28, the French responsible of the sect. This is this story that he wrote in his first novel, "Chute Ascendante" that became a best-seller. From this moment, Alban Bourdy became active in antisects, he wrote about 15 other books (including an autobiography written in English, and some ones co-written with famous psychologists), and made a lot of conferences in all Francophone countries. He appeared in many TV shows, and is also a radio producer.

Publisher: 7 écrit (the contract with them ended after legal dispute, that's why now it's self-published)

French guy falls in love with a South American woman who is part of Russian sect Ashram Shambala. As the woman drags him along to the sect, he manages to come back to his senses when he finds out she was untrue about her feelings. He then manages to find true love and success as a writer, but never gets over this passion, which ends up driving him crazy.

What drew me into the story was the curiosity about how do people get involved with sects and what keeps them from the point of view of a man who has been there but was smart enough to get out.

Sometimes dialogues become monologues when it comes to showing the point of view of the narrator and conversations can get quite artificial.

I would watch this movie because the sect theme is interesting and this one, especially, brings along interesting subjects related to occultism and spirituality in general.

It could have a large fanbase if adapted because there is a niche on the internet focused on understanding the logic behind sects.

It could have Awards potential if adapted, and mostly regarding actors representing powerful characters such as Maria.

This story is original because the author/narrator is willing to share his experiences on a sensitive subject such as taking part in a sect whose founders are now jailed.

The narrator and protagonist is not afraid to show his vulnerabilities and he is, at the same time, open about his feelings and the power of Maria as well as and critical of his involvement with the sect. Maria is a powerful and seductive character with a rich construction.

The story could be improved regarding artificiality of dialogues and a more critical insight on the narrator's idealization of a woman and what does that represent in the whole story would certainly be welcome. Maria is a very interesting character and there could also be developed outside the narrator's idealization of her. What are her motivations? Even though the idea of interlayering two moments in the life of the narrator is interesting, it can become confusing easily.

It should be considered because even though there certainly are issues regarding narrative flow, it's an interesting story about an enticing and important subject such as sects, and is told by a narrator who is willing to share his weaknesses and vulnerability.